On the eve of the Free Iran Global Summit on Friday, July 17, some 38 of the most prominent religious leaders of Britain have supported the Iranian Resistance and the ten-point plan of the President-elect of the National Council of the Resistance of Iran (NCRI), Maryam Rajavi, for a free and democratic future Iran. Among the signatories of this statement are five former or current Archbishops, including Dr. Rowan Williams, former Archbishop of Canterbury, and a distinguished member of the House of Lords.

Iranian Communities from across Europe, North America, and Australia will come together to host the annual Free Iran Global Summit on July 17. This event will be attended by prominent personalities and advocates for freedom along with distinguished thought leaders from across five continents to stand for a free Iran and to voice support for an Iran where human lives are valued and the death penalty is abolished, a nation at peace with its neighbors and united in its unshakable resolve to uphold human rights. A democratic republic, where the ballot box is the only criterion for legitimacy.

The full text of the statement by 38 British religious leaders is as follows:

We remain deeply concerned about the human rights situation in Iran, which has deteriorated for the worse during the last years.

We note the UK statement for the Universal Periodic Review Adoption of Iran on 12 March 2020, which states, “In November last year, we saw the most deadly crackdown against its citizens for decades, while persecution and discrimination towards religious minorities continue unabated.”

The persecution of religious and ethnic minorities, including harsh prison sentences against Christians, is part of a wider domestic repression, which culminated last year in the reported killing of at least 1500 people during the nationwide popular protests for change, human rights and increased social freedoms and economic opportunities.

Since then, the regime has continued its arrests of dissidents, students and other human rights activists inside Iran, especially targeting the supporters of the organised Iranian Resistance movement, the NCRI and the PMOI/MEK.

We also note reports revealing that the Iranian authorities did not inform the public about the coronavirus outbreak in the country in late January in order to advance their own political objectives and priorities including the Parliamentary Elections in February. They have been hiding the real number of COVID‐19 deaths due to the fear of public backlash and widespread protests. According to the Iranian resistance movement, the NCRI, the actual number of fatalities has passed 60,000. The regime refuses to use the enormous wealth diverted by the Supreme Leader to religious foundations in a way that helps the Iranian people combat the Coronavirus crisis. Instead, the regime has demanded people go back to work, which has put the country on the verge of a second wave of COVID19 outbreak. The outbreak of coronavirus in Iran’s prisons is particularly alarming for political prisoners and protesters detained unjustly since the 2019 November protests.

We applaud the UK Government’s decision to classify Iran as a human rights priority country and to commit to hold it to account for its human rights abuses. We now call on the UK Government and the FCO to do more at the UN and internationally in order to turn this commitment into concrete actions that ends impunity that the perpetrators of serious human rights violations enjoy in Iran.

We also urge the UK Government to work with allies to put more diplomatic, political and economic pressure on the regime so as to secure the immediate release of all political prisoners, detained protesters and dual national held unjustly in the country.

We also join the Anglo‐Iranian community and the Iranian Resistance movement, the NCRI, in calling on the UN Secretary‐General and the UN High Commissioner for Human Rights to dispatch a fact‐finding

mission to Iran to visit Iranian prisons and meet with prisoners as a matter of urgency.

We also support the 10‐point democratic platform for future Iran, presented by President‐elect of the Iranian Resistance movement, Mrs. Maryam Rajavi, which stipulates that “Any form of discrimination against the followers of any religion and denomination will be prohibited” and commits to “the Universal Declaration of Human Rights, the UN Charter and other international covenant and conventions.” 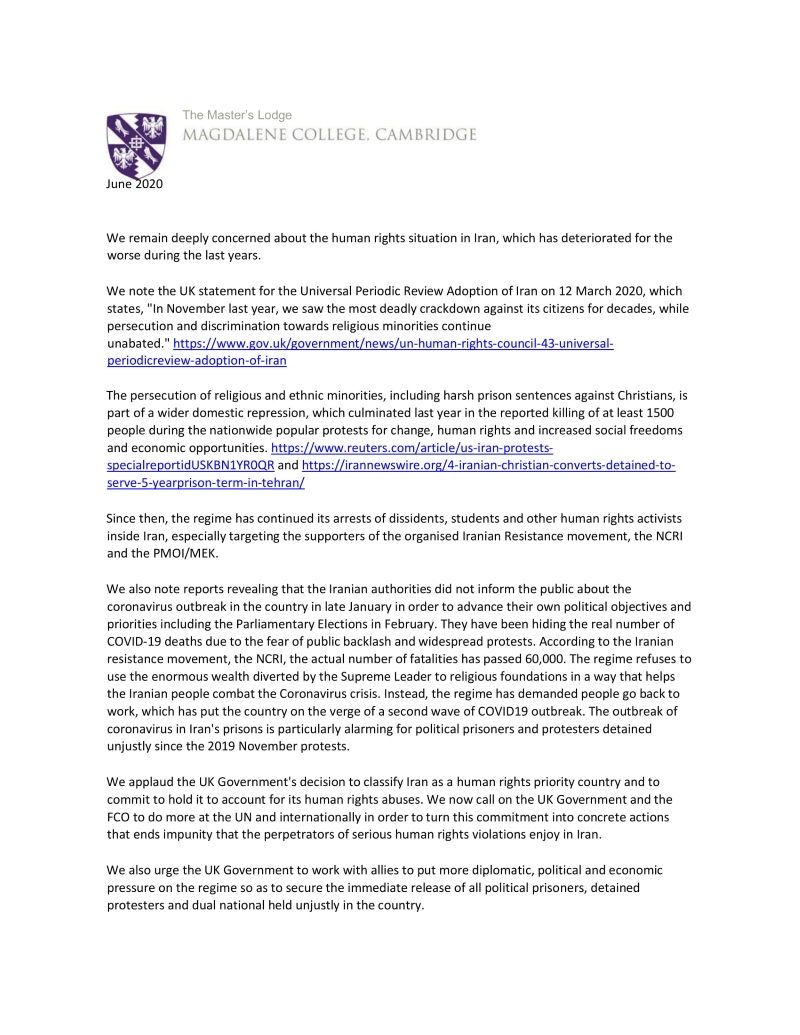 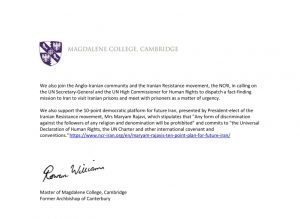