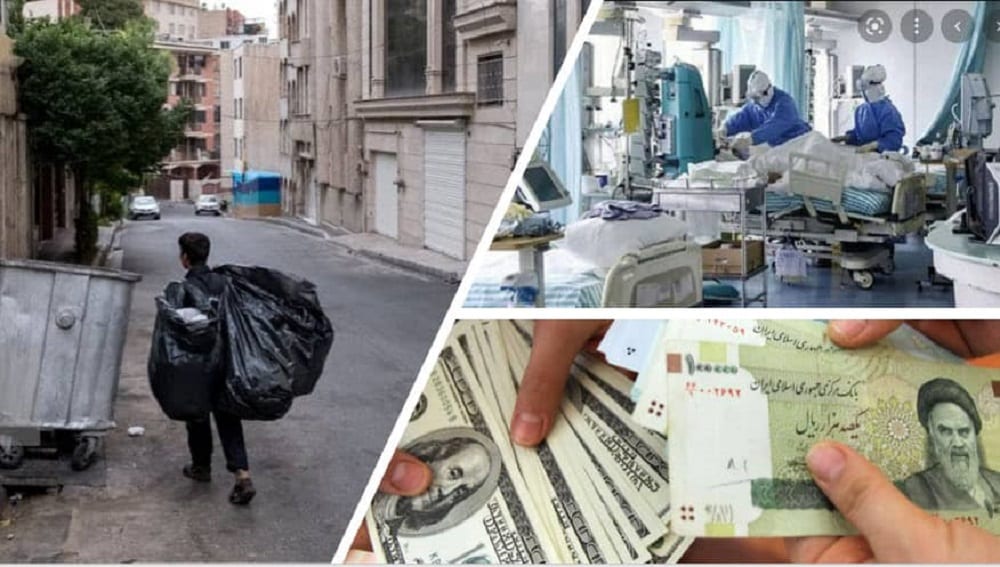 A glance at Iran’s state media on September 15 indicates the regime is entangled by crises it has created. These crises include the Covid-19 outbreak and a declining economy that has increased society’s restiveness.

One of the subjects discussed in Wednesday’s newspapers in Iran is the Covid-19 death toll. The state media now acknowledge the regime’s engineered coronavirus statistics fall well behind the real mortality and infection rate.
“A few weeks ago, Kourosh Holakouee Naeini, a professor of statistics and epidemiology at Tehran University of Medical Sciences, claimed that the Covid-19 death toll in Iran was seven times higher than the official figure. However, the former Minister of Health acknowledged the difference between the actual statistics due to media pressure. He lowered this difference to 2.5 times,” wrote the state-run Jahan-e Sanat daily on September 14.
Jahan-e Sanat quoted Massoud Pezeshkian, member of the parliamentary health commission, as saying that Wednesday’s death toll was “The actual daily death rate from Covid-19 is more than 1,200,” on Wednesday alone.
“The actual death toll from coronavirus is definitely higher than the Ministry of Health estimates. Ironically, some time ago, the former Deputy Minister of Health said the real [death toll] is double the announced statistics. A few days after this announcement, the members of the Ministry of Health announced that the actual number was 2.5 times higher than the announced statistics,” Jahan-e Sanat wrote.
“Such contradictory statements indicate the existence of unrealistic statistics on a large scale,” Jahan-e Sanat wrote quoting Mohammad Reza Hashemian, MSc Specialist, at Masih Daneshvari Hospital.
Downplaying the Covid-19 crisis, mainly announcing engineered low statistics are part of the regime’s inhumane Covid-19 policy.
Aftab-e Yazd daily on September 15 underlined that “The continuation of the Covid-19 crisis and the increase in casualties, the lack of coordination between the people and the government, disagreements among decision-makers, the resignation and dismissal of officials, and the intensification of public distrust of the system,” could have “negative consequences” for the regime.

“These factors, along with the failure of many government initiatives to curb the coronavirus, have further eroded the nation’s confidence in the system. But suppose the negative consequences from impractical and inefficient decisions continue. In that case, the efficiency and legitimacy of the political system may be challenged,” Aftab-e Yazd further warned officials that their inhumane Covid-19 policy had increased the society’s hatred toward the regime.

Another subject Iran’s state media only partly acknowledged was Iran’s worsening economic crisis. The regime’s institutionalized corruption, mismanagement, and misusing of the country’s wealth have caused inflation and skyrocketing prices.
“According to Iran’s Statistics Center, milk prices have been on the rise since June 2019, especially after the increase in milk prices by the parliament. If we consider the price of one liter of milk in 2019 was at 4,500 tomans, it is currently 12 to 14 thousand Tomans,” Jahan-e Sanat wrote in this regard.
“The price of 30-egg basket is 50 to 65 thousand tomans. A month ago, its price in the market was 45,000 Tomans. It can be said that the price of each egg basket has increased from 5 to 20,000 Tomans in less than a month,” wrote the state-run Vatan-e Emrooz daily.
The skyrocketing prices are due to the high inflation rate. While state media and statistic centers speak of a less than 40% inflation rate, Ehsan Soltani is one of the regime’s experts who believe that the real inflation rate in June was 71%.
The current inflation rate is due to the regime’s banknote printings for compensating the

“The banknote printing has reached a point that Massoud Mir-Kazemi, the new chief of the Planning and Budget Organization, complains about it,” wrote the state-run Javan daily, an outlet linked to the Revolutionary Guards (IRGC). Mir-Kazemi bogusly announced that the banknote printing should be eradicated, and his comments were mocked by Javan daily.
“When the government has a budget deficit of over 500 trillion tomans this year, and the banks also have the privilege of paying interest on depositors’ accounts, we should ask Mir Kazemi how he wants to eradicate the creation of about 100,000 billion tomans a month!?” Javan wrote in this regard.

The economic and social crises have turned Iran’s society into a powder keg. The regime’s deliberate negligence of people’s problems and giving hollow promises continue to increase the public hatred toward the regime. The current situation prompted Ebtekar daily to warn regime officials on Wednesday about people’s reactions.
“A one-sided political analysis of all phenomena and events in different spheres gives rise to the syndrome of ‘illusion of understanding the truth’ among politicians. A syndrome that can be very dangerous and worrying for them and society,” Ebtekar wrote.
“In a politicized society like Iran, politicians think they are experts on everything and are allowed to have expert opinions on everything. The first consequence of this situation will be the emergence of the phenomenon of purging elites in society. No problem can be solved in the strict sense of the word. Rather, politicians attempt to cover all problems by adopting and applying some ineffective and short-lived solutions,” Ebtekar adds.
“The worrying thing is that people’s old wounds open up, and people may react restlessly. If these reactions are combined, there will be serious and fundamental concerns [for the system],” Ebtekar daily warned officials.