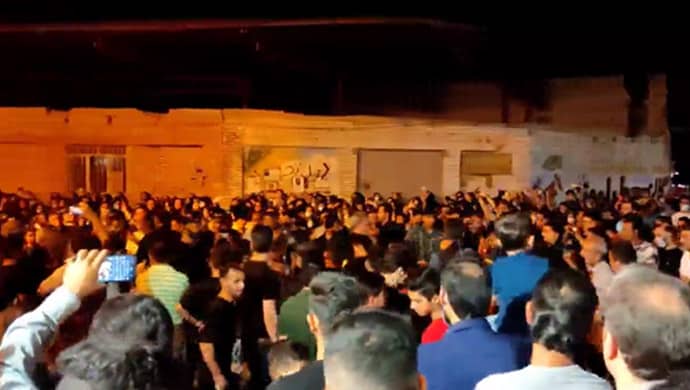 Protesters Chanted: “Khamenei Is a Murderer, His Rule Is Illegitimate,” “Raisi, Shame on You, Leave the Country Alone,” and “Death to the Dictator”

Four days after the collapse of the Metropole 10-story building in Abadan, in addition to the uprising of the angry people of Abadan, anti-regime solidarity protests with the people of Abadan spread to other cities and thousands took to the streets in Khorramshahr, Shahinshahr, Bandar Abbas and Behbahan. The protesters chanted:  “Khamenei is a murderer, his rule is illegitimate,” “Raisi, shame on you, leave the country alone,” “I will kill whoever killed my brother,” and “Death to the dictator.”

In Abadan, people protested outside the municipality, demanding the trial of the perpetrators of the Metropole-building tragedy for the third night running on Thursday evening. The 10-story Metropole building collapsed, due to regime agents’ negligence and corruption, leaving at least 19 killed and dozens injured and under the rubble. The protests started due to the regime’s ignoring the experts’ previous warnings, its inaction after the incident, and leaving those still alive under the rubble. The outraged people of Abadan chanted, “Death to Khamenei,” “Khamenei is a murderer, his rule is illegitimate,” “Khamenei, shame on you, leave the country alone,” “Basiji (repressive regime agents), get lost,” “Death to the principle of velayat-e faqih (supremacy of a mullah on all people),” and “Death to the regime that deceives its people.” They also shouted, “Our enemy is here. They lie, saying it’s America,” “I will kill, whoever killed my brother,” “We will not accept humiliation,” and “have no fear, we are all together.”

In solidarity with the people of Abadan, thousands of people in Khorramshahr took to the streets, chanting, “Abadan, as long as we live, we will not leave you alone,” “Raisi, shame on you, leave the country alone,” “People of Khorramshahr rise up, your brother was killed,” “I will kill, whoever killed my brother,” “Guns, tanks are no longer effective, mullahs must go,” “Death to the dictator,” “Shame on the state-run Radio and TV,” “People of Khuzestan will die, but won’t accept humiliation,” “Leave Syria, think about us.” The freedom-loving women of Khorramshahr played a significant role in these demonstrations. Their slogans included, “They (regime authorities) became accomplices with thieves, killing the nation,” “We will fight, and will take back this city,” and “Death to Basiji, the disgraceful thugs.” The people of Khorramshahr ridiculed the recent regime propaganda song to praise Khamenei, chanting, “Commander! (where are you?!) the town is under the rubble.”

Mrs. Maryam Rajavi, the President-elect of the National Council of Resistance of Iran (NCRI), hailed the people of Khorramshahr, Bandar Abbas, Behbahan, and Shahinshahr who have risen up in support of Abadan and its protests, and said: The tragedy in Abadan is a manifestation of the 43-year rule of the clerical regime, which has brought Iranian people nothing but crimes, corruption, and theft. The cry of “Khamenei is a murderer, his rule is illegitimate,” “Raisi, shame on you, leave the country alone,” and “I’ll kill whoever killed my brother” reflect the desires of all Iranians to overthrow the mullahs’ ominous rule. She stressed: Yes, the enemy of our people is the plundering clerical regime that has occupied our homeland. Mrs. Rajavi praised the role of the brave women of Khorramshahr in defending the people of Abadan and added: Their courage is a model for all Iranian women.

Last night, angry locals in Abadan burned down a shop that belonged to Hossein Abdolbaqi, owner of the Abadan Metropol Complex who has built prisons in Abadan and is a member of the Khatam-ol-Anbiya HQ of the Revolutionary Guards.

People in Abadan chant: “After years of crime, death to the Supreme Leader!”

People in Abadan chant: “Khamenei, shame on you! Let go of the country!”

People in Abadan chant: “I will kill those who killed my brother!”

People in Abadan chant: “People of Abadan, cry out your right!” and “Theft and embezzlement are a plague to the people!”

“I will kill those who killed my brother!”

“The Islamic Republic is a lie!”

People in Abadan chant: “Death to the government of deceit!”

People in Shahinshahr in Isfahan province chant: “Today, we all mourn as the abandoned Abadan is mourning”, “Abadan, your brother has been killed!” and “I will kill those who killed my brother!”

People in Khorramshahr chant: “Our city is broken and the officials are always asleep!”

People in Khorramshahr chant: “We are vigilant and we loath discrimination!”

People in Khorramshahr chant: “Artillery, tanks and firecrackers, the clerics must get lost!”

People in Khorramshahr chant: “Deat to the dictator!”

People in Khorramshahr who have rallied are calling on their fellow citizens to join the protest and chanted: “Khorramshahr, those in Abadan don’t need spectators!”

The people of Behbahan gathered and mourned in a traditional way for their brothers and sisters in Abadan.

The people of Behbahan gathered and mourned in solidarity for their brothers and sisters in Abadan.

Previous articleTo Make Sense of the Regime’s Economic Surgery, Look at Uprisings
Next articleIran: 10 Executions in One Day, at Least 19 Executions, Including Three Women in Four Days