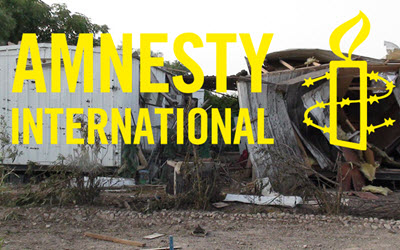 NCRI – Amnesty International issued a public statement on Wednesday demanding that members of the People’s Mojahedin Organization of Iran (PMOI or MEK) in Camp Liberty, Iraq, be protected from attacks, following the rocket attack on the camp on Monday in which some 50 people were injured.

The following is the full text of Amnesty International’s statement:

Camp Liberty residents must be protected from attacks, said Amnesty International as it called for an independent, impartial and prompt investigation into the 4 July rocket attack on the camp, which is home to Iranian exiles.

Camp Liberty, located near Baghdad International Airport in the south-west of the city, was struck by rockets in the evening of 4 July, leading to some 50 injuries and material damage, according to residents. Five injured residents were transferred to Baghdad hospitals, while the remainder were treated at the camp clinic.

Residents estimate that hundreds of Iranian exiles, mostly members and supporters of the Iranian opposition group, the People’s Mojahedin Organization of Iran (PMOI), and their families, continue to live at the camp.

Camp residents told Amnesty International that the rocket fire started at around 8.35pm on 4 July as camp residents gathered together after breaking their Ramadan fast and lasted for about 15 minutes. According to eyewitnesses, the southern section of the camp – which has a high concentration of women residents – was affected worst. Eyewitnesses reported that some 50 metal trailers and a number of storage facilities for food and appliances were burned or otherwise damaged in the attack.

A 30-year-old woman told Amnesty International: “I was just finishing up eating when I heard the first explosion. I got out of the food hall together with my friends, and we started running. A rocket exploded about three metres away from me. From the impact, I fell on the ground on my face. I had blood all over my face and nose.” Another woman said that she felt that she was being “buried alive” under the flying debris and smoke as she hid in a deep hole in the ground which she said residents had previously dug out for protection in case of attacks.

The spokesperson of the Ministry of Interior confirmed that Camp Liberty has been “hit by rockets” on 4 July.

Amnesty International is calling for a prompt, independent and effective investigation into this attack, for those responsible to be brought to justice and for measures to be put in place to prevent future attacks. The organization regrets the failure to adequately investigate previous deadly attacks against the camp, which sent the message that camp residents can be attacked with impunity. No group has yet claimed responsibility for the 4 July attack.

Camp residents also complained to Amnesty International about their desperate living conditions. They said that Iraqi security forces controlling access to the camp had prevented the delivery of food, medicine and fuel in the eight days preceding the attack. The shortage of fuel in particular impacts camp residents, who rely on generators for electricity.

Amnesty International calls on the Iraqi authorities to ensure that electricity and other essential services to the camp are restored, that access to basic necessities is not impeded and that those whose homes have been destroyed in the shelling are provided with adequate temporary shelter without delay.

The exiles living in Camp Liberty previously had lived in Camp Ashraf since the mid-1980s. After the 2003 US-led invasion of Iraq, the camp and its residents were placed under US protection but this ended in mid-2009 following an agreement between the US authorities and the Iraqi government. On 28-29 July 2009, Iraqi security forces stormed into the camp; at least nine residents were killed and others were injured. Thirty-six residents who were detained were allegedly tortured and beaten.

In 2011, the Iraqi government announced the closure of Camp Ashraf after relocating its residents to Camp Liberty in the south-west of Baghdad.

On 29 October 2015, Camp Liberty was struck by a barrage of rockets, which killed at least 23 people, including one woman, and injured dozens. An Iraqi militia, the al-Mukhtar Army, claimed responsibility for that attack and warned that the attack may be repeated.

The government has failed to adequately investigate previous attacks on Camp Ashraf and Camp Liberty, and no one has ever been brought to account.

According to a December 2011 memorandum of understanding between the United Nations and the government of Iraq, the UN Refugee Agency (UNHCR) may process requests for international protection from residents of the camps. Those residents who apply for international protection are asylum-seekers under international law. In its “Update on the implementation of solutions for residents of Hurriya (Liberty) Temporary Transit” issued on 14 December 2015, UNHCR stated that some 1,970 residents remained at the camp, while a further 1,100 had been relocated to third countries.

Iranian Resistance President-elect Maryam Rajavi on Monday called on the UN Security Council, the European Union and their member states to decisively condemn the criminal missile attack on Camp Liberty. Mrs. Rajavi said now that no doubt remains as to the Iranian regime’s intentions to cause more bloodshed at Camp Liberty, there is added urgency for the United States and the United Nations to take action to guarantee and provide safety and security for the residents of Camp Liberty until such time when all of them have departed Iraq. She emphasized that this would be consistent with the repeated and written guarantees the U.S. and the UN have given regarding the safety and security of Camp Liberty residents.

Maryam Rajavi said that the missile attack on Camp Liberty, especially following an inhumane eight-day siege, blocking fuel, food and medicine from entering the camp, demonstrated that the religious dictatorship ruling Iran is terrified of the People’s Mojahedin Organization of Iran (PMOI/MEK) and the Iranian Resistance, which it views as an existential threat.

Maryam Rajavi noted, the mullahs’ regime opposes any solution for Camp Liberty residents that would ensure their safety and security and tries to obstruct it. The only acceptable options, as far as the regime is concerned, are to either compel Camp Liberty residents to surrender and abandon their struggle or to physically eliminate them, Mrs. Rajavi said.