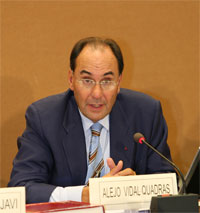 THE JORDAN TIMES – By Alejo Vidal-Quadras   Feb 01,2012
It has only been a matter of weeks since the US pulled out of Iraq and already the human rights situation has taken a considerable turn for the worse.

Now that there is little constraint on Iraqi Prime Minister Nouri Al Maliki, the optimism that the Americans brought to the country is quickly fading away.

There is nothing that exemplifies this sad shift better than Baghdad’s Camp Liberty. Under the Americans, it was a symbol of emancipation. It encapsulated the new dawn so desired by so many Iraqis.
Under Maliki, Camp Liberty’s name has become horribly ironic. Rather than a byword for freedom, it has become a prison.

It is to this new and ugly Camp Liberty that Maliki wants to send 3,400 supporters of the People’s Mujahedin Organisation of Iran (PMOI/MEK), the longest standing and better organised opposition movement to the totalitarian regime in Iran. Around 1,000 of them are women.

These people have been living in Camp Ashraf, north of Baghdad, for decades. They have made Ashraf their home; it is more like a city than a camp. I was there as head of a delegation from the European Parliament in October 2008.

Maliki and his henchmen are doing Tehran’s bidding against these dissidents. Keen to remove a potential threat, the mullahs have given Iraq orders to dispose of the Ashraf residents by whatever means necessary. Iraqi troops have raided Camp Ashraf on more than one occasion, killing dozens. A massive international campaign in Europe and US prevented another massacre at the end of 2011. So instead of mass killing, the Iraqis are planning to squeeze the life out of Ashraf residents by locking them in Camp Liberty and then throwing away the key.

Under the UN-brokered deal, Camp Liberty was supposed to be fit for thousands of people to live in. It is however today no more than a cattle pen, without drinking water, electricity and with no room for people to live in dignity and no permission to leave the camp. That makes it nothing but a prison.

The Americans provided confirmation of Camp Liberty’s sorry state. General David Phillips, commander of the US Military Police between 2008 and 2011, told a conference in Paris earlier this January that he had to “bring up some very troubling information from my sources in the Iraqi government and Ministry of Interior”. These sources revealed that Camp Liberty had been “looted, vandalised and pilfered away”.

“These people are going to live in one square kilometre,” Rudy Giuliani, former mayor of New York, told the same conference.

The Iraqi government has refused to allow any of the Ashraf residents to visit the place because they don’t want them to see how terrible the conditions of their imprisonment are going to be, Giuliani said.

Ashraf leaders are in serious risk of being separated from the other residents and transferred to a separate prison as soon as they arrive, Phillips said, adding: “My personal sources, who I served with, I bled with and I fought with, so I trust them, they say that Camp Cropper … is being reopened. That’s the facility where we kept the former senior leaders of the Baathist regime.”

Camp Cropper “is being reopened for the senior leaders of the MEK,” he told the conference.

Ashraf residents do not object in principle to the idea of being transferred to another camp, provided that it is only a staging post, a place where their applications for asylum can be assessed. The UN’s goal should be to resettle these families in third countries as soon as possible.

But there is no way Ashraf residents will agree to be rehoused in a prison. Any pressure from the UN for them to do so would be simply shameful.

The writer, a vice president of the European Parliament since 1999, is from the ruling centre-right Spanish People’s Party. He contributed this article to The Jordan Times.