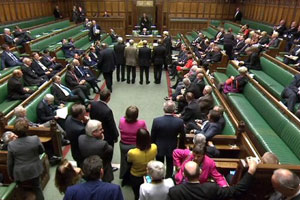 We were just informed that there was yet another rocket attack on Camp Liberty, where members of Iran’s democratic opposition, the PMOI, were forced to move in 2012 after assurances of protection by the UN and the US government. And yet we were waiting to see these promises to be fulfilled when this 4th deadly attack on Camp Liberty took place this evening local time, (29 October 2015).

According to initial reports received at least 20 camp residents, all protected persons under the Fourth Geneva Convention and recognised as refugees by the UN Refugee Agency, the UNHCR, have been killed during this heinous attack and scores of residents have been wounded and many of them are in critical condition. According to latest reports all electricity and communications at the camp are cut off.

The attack took place after amply warnings by MPs from both Houses of Parliament in the past few weeks, which were reiterated in several conferences by the BPCIF including the most recent one in the Parliament on 19 October.

Lord Carlile of Berriew QC, the co-Chair of the BPCIF condemned this attack in strongest terms and said “it is contrary to all international law”. While reiterating the need for international intervention, in particular from the U.S. and the EU, to secure the safety of these residents, he called on the “UN to institute an immediate inquiry into why and how this attack happened”.