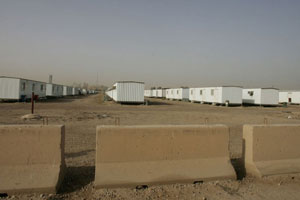 The Iranian regime’s meddling in Camp Liberty will set the stage for another deadly attack on its 3,000 residents, the British Parliamentary Committee for Iran Freedom has warned.

The alert comes after remarks by Iraq’s minister of Human Rights, Mahdi al-Bayati, who said the UN-protected Iranian dissidents in the camp were not refugees and their presence in the camp was ‘illegal’.

Mr al-Bayati claimed in a meeting with the Special Advisor to the UN Secretary-General on Resettlement of Liberty Residents, Mrs Jane Holl-Lute, on 24 November that: “The PMOI lack refugee status and their stay in Iraq is illegal.”

According to the website of Iraq’s Human Rights Ministry, the Iraqi minister reiterated similar remarks in a meeting with the UN Deputy Special Representative of the Secretary-General for Iraq, Mr György Busztin, on November 16.

The British Parliamentary Committee said: “Mr al-Bayati’s baseless and misleading remarks deliberately ignore the fact that the residents of Camp Liberty are recognised as Protected Persons under fourth Geneva Convention as well as Persons of Concern and Asylum seekers by the UNHCR entitled to protection under international law.

“It also ignores the court rulings in Europe and United State rejecting the terror labelling of the Iranian opposition as unjust and perverse.

“The British Parliamentary Committee for Iran Freedom firmly condemns these mistaken and worrying remarks by the Iraqi Human Rights minister, which jeopardise the life of defenceless Camp Liberty residents, who for their protection rely on the UN and the international community.

“We therefore reiterate our call on the Iraqi Prime Minister, Mr Al Abadi, to take immediate action to make sure that his cabinet refrains from provocative comments endangering the life of Liberty residents and rejects any involvement of the Iranian regime in the Liberty dossier, since any attack on these defenceless refugees tarnishes the reputation of entire Government of Iraq.”

The Committee also urged the Iraqi Prime Minister to publicly declare Camp Liberty as a UN refugee camp and to cooperate with the residents and the UNHCR to ensure their safety.

The Committee added that the Iraqi Human Rights Ministry had quoted remarks by Mrs Holl-Lute on its website, where she said: “UNAMI is seeking to arrange family meetings for the members of this organization to relieve their problems and persuade them to return to their country.”

During her visit to Iran, Mrs Holl-Lute also ‘met with a number of Iranian officials and discussed the issue of these family meetings with them’, the report on the Iraqi website said.

The Committee said: “If this report is true, by involving the authorities of a regime which these refugees have escaped, Mrs Holl-Lute’s conduct clearly breaches international laws and conventions adopted in order to guarantee the safety and security of defenceless refugees and asylum seekers.

“Such statements by a senior UN Official will allow the Iranian regime to take advantage of the different UN Bodies in Iraq to advance its murderous plots against the residents in Camp Liberty, as was the case during the office of the former UN Special Representative of Secretary-General for Iraq, Mr Martin Kobler.

“We strongly urge Mrs Holl-Lute to publicly distance herself from these remarks and make it absolutely clear that the involvement of the Iranian regime or any of its officials in the Camp Liberty dossier is not only unacceptable but also unlawful given the status of the residents and the Iranian regime’s appalling Human Rights records.

“Her failure to do so will allow the Iranian regime and its proxies in Iraq to use her office as a tool to promote their malign plan of exerting psychological pressure on these Iranian refugees in order to set the stage for future attacks to eliminate the legitimate opposition to the theocracy in Tehran.

“Ultimately, the final responsibility for implementing the above steps towards a peaceful solution to this Iran-created humanitarian crisis lies with the United States and its allies as well as the United Nations.

“Consequently, we once again call on them to take firm actions to make sure that the above demands – vital to the safety and well-being of the refugees in Camp Liberty – are being respected and implemented.”