Geneva: Supporters of Ashraf continue their sit-in protest for the rights of Ashraf residents 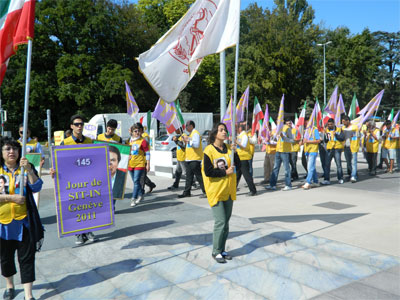 On this day, before the sit-in starts, Monique Boget, the Mayor of Meyrin, a municipality near Geneva, visited the protestors and announced her support for the rights of Ashraf residents.

During her speech about the history of Meyrin, she handed in a book of the city’s history as a gift to the protestors and announced her and city council’s sympathy and solidarity with the legitimate demands of Ashraf residents.

Some of the sit-in protestors speaking from personal experience briefed the mayor and city council on the political situation and human rights violations in Iran, and on the crimes committed by the Iraqi government against Ashraf residents.

Moreover, this morning on September 16, from 11 am to 12:15 pm, the protestors gathered in front of UN headquarter of the High Commission for Refugees and asked the Commissioner to address the rights of Ashraf residents.

The supporters of Ashraf residents continued their 145th day of peaceful protest with a demonstration in the famous Nation Square under the Geneva’s hot sunshine.

Simultaneously, they placed a book and photo exhibition beside the sit-in, and the youth actively collected signatures in support of the residents of Ashraf.

Camp Ashraf is the residence of 3400 members of the People’s Mojahedin Organization of Iran in the Diyala province in northern Iraq.

Previous articlePresident Obama; MEK Blacklisting Has Justified Murder Of My Daughter, Saba
Next articleAppeal to Secretary Clinton to delist the MEK