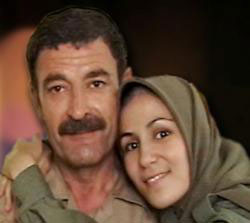 Violent attack on Camp Ashraf was encoureged by the U.S. FTO list

It is exactly 5 months since my daughter Saba was murdered, along with 35 others in a massacre lead by Al-Maliki forces at the behest of Tehran.
Global protest, sit-ins and campaigns are still ongoing.

The bloodbath in the Camp along with tens of clandestine arrests and kidnappings of MEK families in Iran is on also ongoing, justified by the US State Department’s blacklisting of MEK.

Furthermore, in July 2010, the US Court of Appeals for the District of Colombia Circuit ordered that the State Department re-examine the decision to keep the PMOI in the FTO list. Thirteen months on, the Department’s unusual reluctance in complying with the court order is unjustified and a contravention of the Rule of law.

In early 2004 a 16-month investigation period at camp Ashraf,60 miles north of Baghdad and home to some 3400 members of the MEK, was performed by nine US agencies including the FBI, the State Department, the Department of Justice, the Immigration Office, the DIA.

The objective was to screen every single resident of the camp. According to the New York Times on July 27, 2004, the US government announced: “U.S. Sees No Basis to Prosecute Iranian Opposition ‘Terror’ Group Being Held in Iraq”.

Following the D.C circuit court of appeals on July 16th 2010 ruled that the case be reviewed, a strong voice in the US congress has urged Secretary Clinton to put an end to the flawed policy of appeasing the mullahs in Tehran and the blacklisting of the MEK.

Since 2008 twenty courts in Europe issued definitive ruling for delisting MEK due to lack of evidence, which was later carried out. France’s judiciary in 2011 announced there is no evidence of terrorism against the MEK.

while the US State Department is still tendentious towards appeasing the mullahs, the “vociferous mediatic rage” by Iranian regime’s supporters and pundits in capitol hill is at its highest to persuade the Whitehouse to keep the MEK on the terrorist list.

The past 4 week engineered campaign with its thread back in Tehran has proved to any neutral bystander, that such efforts are part of a campaign to prevent regime change in Iran.

Meanwhile concerns by lawmakers and analysts worldwide is understating Whitehouse independent decision making regarding the delisting of MEK .

Both failed policy to push for dialogue or engage in change of attitude with a dead regime and using the terror tag on MEK as bate for the already dead and illegitimate clerics ruling Iran is a laid out chess game planned by Tehran .

Iranian officials’ interpretation of the policy to “engage” with the vicious tyrants in Iran has overtly been mocked as a sign of weakness on behalf of the Whitehouse.

Nevertheless my daughter, Saba, has paid the price for such misguided policy with her life. MEK is the only movement, whose rights according to international laws and principles of human rights have been deliberately overlooked under the pretext of “National Security” and the “US list of foreign terrorist Organizations.”

When it comes to understanding “realpolitik” the recent winds of change; ousting dictators one after the other will definitely reach the mullahs in Tehran.

The bitter truth for clerical regime pundits is that it is finally the opposition which will proceed to bring about a change in the turbulent country.

Despite the push to keep the Iranian pro- democracy opposition (MEK/PMOI) in the US black list, and disregard of millions spent in a ferocious – but repetitious smear campaign against MEK , the latest show of legitimacy by the organization in its election of a new Secretary General as well as several last gatherings has proved efforts futile.

The fruit of the argument could be read between the lines of a speech given by Mr. Jean Ziegler, Vice-President of the Advisory Committee of the UN Human Rights Council in a meeting in July this year;
“Camp Ashraf is a source of inspiration and hope for the Iranian people in achieving democracy.

He added that: “It is clear that from Egypt to the Nafous Mountains in eastern Libya and to Tunisia, all these youth are looking for a reference and an example. Ashraf is the illustration of what they are in search of.”
Any delays to end the policy of appeasement would come at the price of more lives being lost in camp Ashraf.

The MEK must be delisted; the survival of human rights and democratic values is a necessity of the 21th century against dictators.
The US must change its policy towards the Iranian regime and side with the Iranian people and its resistance.

Saba Haftbaradaran , (born 21 February 1982 , was former student of Law graduate , who was killed in an attack on the refugee Camp Ashraf, April 8, 2011. Reza Haftbaradaran, one of the Ashraf residents and father of Saba is a politcal activist

Previous articleMisguided policy and bias on MEK
Next articleGeneva: Supporters of Ashraf continue their sit-in protest for the rights of Ashraf residents