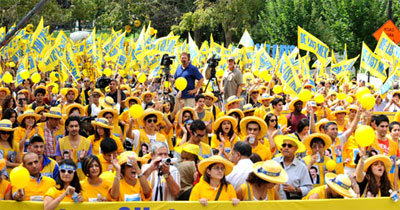 WASHINGTON, Sept. 16 (UPI) – On Aug. 26, hundreds of students and faculty from various universities in the United States, Canada and Europe joined Iranian-Americans in front of the U.S. State Department in Washington to call on Secretary of State Hillary Clinton to remove Iran’s major opposition group, the People’s Mujahedin of Iran, from the department’s list of Foreign Terrorist Organizations.

The PMOI is also known as the Mujahedin-e-Khalq.

Participating students led the protesters with a banner that read, “Secretary Clinton, you now have the backing of the court, the U.S. Congress and the Iranian people to delist the MEK.”

Why does the MEK continue to draw support from universities and why has Western academia has done little to study the group, its influence on the political landscape of Iran and even the region?

Founded in the 1960s by university students, MEK opposed the shah’s rule in Iran and sought a democratic republic. From the outset, universities were the first place where most Iranians, especially women, were introduced to the MEK.

Massoud Rajavi, the sole surviving member of MEK’s original leadership, had the most popular lectures on major political issues of the day and his philosophical discourse on the origins of life and the epistemological awareness that he raised on university campuses in the early months of the 1979 revolution.

The MEK’s political platform and ideological standing as a distinctly nationalist group with a modern, progressive and profoundly anti-fundamentalist interpretation of Islam drew students and faculty en masse to the group.

By 1980, chancellors, deans and faculty of major Iranian universities declared their support for Rajavi’s platform on individual liberties, equality, pluralism and ethnic and religious freedoms.

Ayatollah Ruhollah Khomeini, threatened by the growing influence and popularity of the MEK among academia, declared the “cultural revolution” and closed universities for three years (1980-83). Campuses across the nation witnessed a brutal crackdown.

Violence ensued with thousands of students and faculty purged and executed in Khomeini’s drive to “cleanse” higher education from “anti-revolutionary influences.”

MEK’s anti-theocracy campaign has since expanded and transformed to a relentless struggle underground and in exile, making the group Tehran’s political, social and ideological arch-foe.

This has come at a heavy price. At home, tens of thousands of MEK members and sympathizers have been executed as “mohareb” — enemies of God. Tehran’s strategy to uproot the group has relied on a combination of physical intimidation and political assassinations.

Many outspoken opposition activists, including Rajavi’s brother, Professor Kazem Rajavi, have been killed by Tehran’s terror squads. Kazem Rajavi, 56, who held six doctorate degrees in the fields of law, political science and sociology from European universities, was gunned down in Switzerland by Iranian agents in 1990.

Tehran’s sustained and sophisticated campaign to demonize and discredit the MEK as a legitimate alternative to the rule of clerics has served as the other pillar of its strategy to defeat the group. It relies heavily on a plethora of lies and fabrications about the past and present of the MEK and its leadership.

According to court testimony of former agents of Iran’s Ministry of Intelligence and Security, the anti-MEK campaign has been, and still is, run from the MOIS headquarters in Tehran and then propagated through a web of agents who frequently pose as opposition activists abroad and through what Tehran considers its “assets” in Western media and academic outlets.

One significant consequence of this campaign is the bias that has been instilled among Western academics, scholars and even some non-governmental organizations who have chosen to accept the dominant paradigm in Iran without questions.

In spite of four decades of history involving students, faculty and scholars inside Iran, MEK remains understudied and continues to be misrepresented outside of Iran. The U.S. FTO designation of the MEK, and the legal consequences the label caries, has created an environment that isn’t conducive to seeing MEK as a legitimate political organization.

The MEK’s FTO designation dates to 1997 when the Clinton administration, keen on placating Tehran’s regime through various “goodwill gestures,” designated the MEK as a terrorist organization. Since then, the MEK has won every legal challenge it filed, whether in the United States, the United Kingdom, France or the European Union.

Eight European courts have reviewed thousands of pages of classified and unclassified materials and have concluded that the MEK is simply not involved in terrorism.

With the start of the new academic year, in a joint letter, Iranian and U.S. scholars from several prominent academic institutions in the United States are urging Secretary Clinton to remove the MEK from the State Department’s FTO list, citing Tehran’s use of the terror tag for executions at home, the bipartisan congressional resolution for delisting (H.R. 60) and the July 2010 U.S. Federal Court of Appeals’ ruling as grounds for de-listing.

Kazem Kazerounian, one of signatories from University of Connecticut, says: “Given the tens of thousands of university student supporters of MEK and thousands of faculty supporters executed by the Iranian regime, for their thoughts and not their acts, the issue of MEK is an issue that concerns academicians everywhere.

“Terror tagging MEK, tying their hands and having them defenseless and vulnerable against the atrocities of the ayatollahs — because it is a convenient policy against Tehran — will not be acceptable to us.”

Director of the graduate program in Negotiation and Conflict Management in the School of Public and International Affairs at the University of Baltimore, Ivan Sascha Sheehan, another signatory to the letter, says: “The latest State Department report on MEK further confirms the group’s ineligibility for FTO listing based on statutory language used to label terrorist organizations under U.S. law. MEK’s continued presence on the FTO list is a political setback and undermines a valuable non-military option for supporting indigenous democratic change in Iran.”

Through significant support from the finest minds and talents Iran has ever produced, with more than three generations of experience from different periods of Iranian political history, the MEK needs to be researched and studied free of politics and bias. That begins with their removal from the FTO list.

Ramesh Sepehrrad is a scholar practitioner from School of Conflict Analysis and Resolution at George Mason University. She has focused her research and field work on Iranian affairs as it relates to human rights, gender equality and U.S. policy on Iran for more than two decades.