Interview with Dr. Mohammad al-Sheikhli, Director of the Center for National Justice Studies in London regarding Talebani’s position against Camp Ashraf 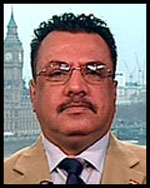 Al-Rafidain Television, June 24:
“Anchor: Jalal Talebani in Tehran made a commitment to close Camp Ashraf, how do you view this commitment?

“Dr. Mohammad al-Sheikhli, Director of the Center for National Justice Studies: It is highly regrettable that Talebani is carrying out his tradition of obeying and loyalty to his masters in the clerical regime in Tehran.

This is a factual reason for their dependence on the Iranian government’s policy, its planning and scheduling inside Iraq, especially as relates to the Ashraf Camp. The last person to speak about terrorism should be Talebani. The Posht-Ashan massacre where in the mountains of Iraqi Kurdistan Iraqi leftists were killed was carried out under his supervision. He is the person who made preparations for Halabja massacre….

“Anchor: It is strange that this commitment is made in a conference about fighting terrorism. Isn’t what has been done against the unarmed residents of Camp Ashraf by the Iraqi government forces and Iranian intelligence, terrorism against the residents?

“Al-Sheikhli: That is truly terrorism. The killing that Maliki forces perpetrated on April 8th and the entire world witnessed it and became documented…”