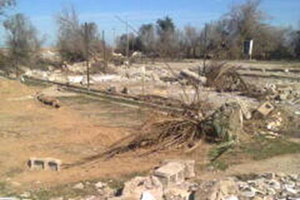 NCRI – Iranian opposition activists residing in Camp Liberty near Baghdad Airport protested the desecration and destruction of the cemetery of the martyrs of Resistance in Camp Ashraf by elements of the Iranian regime.

Ashraf in Diyala Province (65 km north of Baghdad) was the place of residence of Iranian dissidents for 26 years. However, in a joint plan of Iranian regime’s puppet government in Iraq and the United Nations, Iranian dissidents were forcibly evicted from their home and were sent to a small camp called Liberty.

On February 2, Arabic language Elaph Website wrote: “Dozens of residents of Camp Liberty protested the destruction of the grave stones of their victims in Camp Ashraf in Diyala Province, north of Baghdad, by Iraqi militias associated with the Iranian regime.

The protestors are families of those who have been buried in Camp Ashraf cemetery.

The National Council of Resistance of Iran, in a statement issued in Paris stated that Camp Ashraf has been turned into a headquarters for the Shia Badr Organization and the destruction of the cemetery has been carried out by the orders of commander of Badr Hadi Ameri.

Asefeh Emami, a young woman among the protestors says: “My smaller brother Hanif was killed in the attack by Iraqi forces on Camp Ashraf in 2009 and we buried him in Ashraf cemetery. Ever since we were forcibly transferred to Liberty from Ashraf I wanted to put flowers on his grave one day. However, the militias affiliated with the Iranian regime destroyed his grave. Such an act is condemned by every religion and human culture.”

Farshid Madadzadeh that both his brother and sister were killed in previous attacks on Ashraf by Iraqi forces says: “This anti-human behavior only reminds one of the regime ruling Iran that constantly destroys the graves of martyrs and prevents the gathering of martyrs’ relatives and friends at their graves in Iran.”

Another participant said: “When they do this to the cemetery of our martyrs, imagine the threat of attacks and massacre against us in Camp Liberty. Just a week back suspicious people came to the camp for reconnaissance purposes and we disclosed it.”