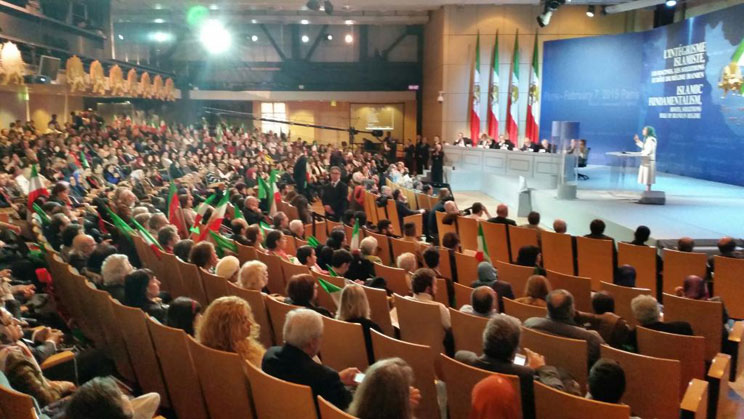 Maryam Rajavi: The first and foremost step in confronting extremism under veneer of Islam is to evict mullahs from the region

NCRI – An international conference titled “Islamic Fundamentalism, Roots, Solutions; Role of Iranian Regime” was held in Paris on the 36th anniversary of the February 1979 revolution in Iran at the invitation of the French Committee for a Democratic Iran (CFID) where some of the most prominent international figures participated.

Maryam Rajavi, President-elect of the Iranian Resistance, offered her viewpoints on the current situation in Iran and the region on the 36th anniversary of Iranian people’s anti-monarchial revolution as follows:

Despite the most barbaric suppression scarcely equaled in today’s world, the Iranian people have steadfastly refused to submit to this clerical regime. The mullahs’ strategy to pursue their nuclear program and to export terrorism and fundamentalism has now failed. Social discontent and the organized resistance have brought the regime to an impasse.

The clerical regime’s greatest defeat came as its attacks and extensive campaign failed to destroy the Iranian Resistance or damage its unified ranks and strength. By overcoming the most difficult of tests, with specific platform and programs and rooted in three decades of struggle, the Iranian Resistance is now the sole democratic alternative to this regime.

The velayat-e faqih regime is the fountainhead and the main sponsor of terrorism and fundamentalism in the region. The first and foremost imperative step in confronting extremism under the veneer of Islam is to evict this regime, particularly from Iraq and Syria. The consequences of any partnering with the mullahs’ regime in the coalition against ISIS is a hundred times more dangerous than any brand of Shia or Sunni Islamic fundamentalism and it would inescapably expand and aggravate the current catastrophe.

The conciliatory stance of Western governments in the course of the nuclear talks is emboldening this regime to attain the nuclear bomb. The clerical regime must be coerced to fully implement the Security Council resolutions, stop uranium enrichment, and accept snap inspections of all its facilities and suspect sites.

The Iranian regime’s 36-year record of atrocities, especially its crimes in Ashraf and its massacre of political prisoners in 1988, must be referred to the International Criminal Court (ICC) by the UN Security Council. The international community needs to impose comprehensive sanctions on this regime and expel its agents, mercenaries and terrorists. Further, it should recognize the National Council of Resistance of Iran (NCRI) and its provisional government that would transfer sovereignty to the Iranian people as the only viable democratic alternative to the regime.

The U.S. government, the United Nations, and the European Union must act consistent with their legal commitments and obligations to end the siege, especially the medical blockade, on Camp Liberty and to declare it a refugee camp under UN supervision. The United States must provide and guarantee the protection of Camp Liberty.
Some of the political figures who participated in this conference which was commenced by former Vice-President of European Parliament and President of the International Committee In Search of Justice (ISJ) Alejo Vidal-Quadras were: Rudy Giuliani, former Mayor of New York City and U.S. Presidential candidate (2008); Michael Mukasey, 81st Attorney General of the United States (2007-2009); Alan Dershowitz, American lawyer and jurist and prominent scholar on U.S. Constitutional and Criminal law; Patrick Kennedy, U.S. Congressman (1995-2011) (United States); Nicole Fontaine, former President of the European Parliament (France); Lord Alex Carlile, Co-Chair of the British Parliamentary Committee for Iran Freedom and former Government Independent reviewer on terrorism (Great Britain); Member of French National Assembly and vice-President for the Parliamentarian Committee for a Democratic Iran Dominique Lefebvre, Vice-President of French MoDem Party and member of European Parliament Robert Rochefort, former Director of DST Governor Yves Bonnet, and former member of the French National Assembly Jean-Pierre Brard (France); Chair of the Spanish Parliament Women’s Committee and Vice Chair of the Women’s Committee of Council of Europe Carmen Quintanilla, and Foreign Affairs Spokesman of the ruling People’s Party in Spanish Senate José María Chiquillio (Spain); Senator Luigi Compagna, and former member of the Italian Parliament and co-president of the Italian Committee of Parliamentarians and Citizens for a Free Iran Carlo Ciccioli (Italy); President of European Humanist Federation (EHF) and Chair of World Organisation against Torture – Europe (OMCT-Europe) Senator Pierre Galand (Belgium).

Speakers emphasized that West’s and particularly the U.S. ignorance toward the fundamentalist and terrorist meddling of this regime in the region and its aggressive occupation of Iraq, Syria, Yemen and Lebanon, as well as the conciliatory stance of the international community in the nuclear negotiations, have imperiled the region and the world and brought the religious fascism ruling Iran closer than ever to attaining the nuclear bomb. Firmness toward this regime, crippled and frail due to its growing economic and social crises and the unprecedented power struggle at the top, is more than ever imperative and effective.

A number of representatives of the Iranian associations also offered speeches in the conference on behalf of the audience.

Secretariat of the National Council of Resistance of Iran
February 7, 2015