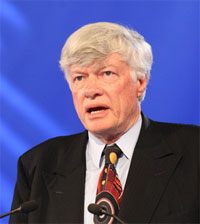 Jeffery Robertson – March 24, 2012 Paris – I don’t have to worry about State Department threats.  My courts, the courts of Great Britain, have considered whether the PMOI is a terrorist organization and do you know what their conclusion was?  They said that any listing of the PMOI as a terrorist organization was, and I quote, “perverse.”  [applause]  And perverse means not only logically wrong, it means morally wrong.  [applause]

Had the court had before it any evidence that MI6, the British security service, which is like that with the CIA and the American security services put before it, and it came to that conclusion.  Where is the evidence?

Alright, there is an organization called Interpol which has issued red notices to a number of members of this organization at the insistence of Iran.  Interpol is a kind of message box that rubber stamps requests by the police of sometimes authoritarian states.  Who was it that rubber stamped the request for the red notices?  It was a man, a senior South African policeman called Jackie Selebi.  Where is he now?  He’s serving a 15 year jail sentence in South Africa for corruption.  So, that is no, his rubber stamping of the Iranian request is no evidence at all.

I have, one of my clients is a man who may not appeal to all of my colleagues here, Mr. Julian Assange of Wikileaks fame or infame.  But he released a Wikileaks memorandum that was quite interesting and it’s been discussed in the latest book, The Last Roll of the Dice.  When President Obama sought to reach out to Tehran after his Cairo speech, he asked to talk about nuclear disarmament.  The Tehran government said, yes, we will talk on one condition, on the condition that you help us extradite back to Tehran for punishment members of the PMOI.  In other words, Iran was prepared, perhaps, to delay slightly its nuclear program if it could get its hands on you, if it could get its hands on the PMOI.

There is a history here and as a judge, I know a little of it because I conducts an inquiry at the behest of the Boroumand Foundation into the 1988 mass murders of members of the PMOI.  That, in my judgment, was one of the worst atrocities the post-war world has ever seen.  Seven thousand, at least.  I know there’s a book suggesting 30,000.  I found at least—[applause]—at least 7,000 political prisoners were subjected to a secret fatwa.

The death jurists came to Tehran’s Evin prison and other prisons around the country.  Asked one question of these political prisoners.  They’d been in prison for seven or eight years.  Do you still support the MEK?  And if they said yes, they were taken out to the courtyard.  They were hung, four at a time, from cranes.  They were hung, six at a time, from the prison auditorium.  They had no trial.  They were utterly vulnerable and they were taken out and hung.  And who was it who hung these 7,000 political prisoners?  It was the then-ayatollahs two henchmen, (Hashemi Rafsanjani), and Khamenei who is now the supreme leader.  [applause and chanting]

This is a terrible, unpunished, unpunished crime against humanity.  The Japanese death marches pale in comparison.  Srebrenica was not as hideous as this wicked mass murder of so many thousands of political prisoners, moharebeh, enemies of God they were condemned as.

So, that awaits justice.  It awaits nemesis and I’ll come back to that at the end.  But it does show that the hatred by the Tehran government, led now by the man who was so instrumental in carrying out that mass killing, is something that shows that the PMOI and Camp Ashraf are refugees because if they go back to their own country, if they’re refouled, as lawyers say, they would be killed.  And al-Maliki, as a proxy of Iran, has been doing some killing at its behest.  In 2009, 11 dead.  In 2011, 47 dead.  So, that is the level of hatred that causes the members of Camp Ashraf, in international law, to be political refugees.

After the invasion of Iraq, the residents of Camp Ashraf gave up their arms.  It was a complete disarmament.  There has never been any suggestion that, credible suggestion that there has been any guerilla or terrorist actions since 2001 and General Patraeus promised them that they would be regarded as protected persons under the Geneva Convention.  Well, of course, when America left, it left them unprotected except by Ambassador Kobler, whose powers are not great and whose imagination is even more limited.

The very same insult.  Isn’t it interesting, that the insults being flung at the people in Camp Liberty today are moharebeh, are the hypocrites, too, they’re called hypocrites, that word that was used by the ayatollah to condemn them to death as hypocrites.  There, that’s the language of humiliation, the language of persecution.

Ambassador Kobler has overlooked this.  He’s done two things that warrant inquiry.  Firstly, by convincing the residents of Camp Ashraf that Camp Liberty was this wonderful place with hot and cold running water and sewage systems.  Of course, when they got there, they found that this was nonsense.  Of course, Ambassador Kobler may himself have been hoodwinked by the Iraqis.  There is one other matter that Ambassador Kobler has overlooked.  Iraq, in international law, is sovereign.  It is entitled to move, humanely, the residents of Camp Ashraf.  But it has to compensate them for taking their property.  Camp Ashraf—the PMOI moved to Iraq in 1986 after this country, France, gave in to Iranian pressure and ordered them out.  And of course, they were welcomed in by Saddam Hussein from 1986, 25 years.  They’ve been building schools.  They’ve been building hospitals and institutions.  It’s worth millions of dollars, Camp Ashraf, and Iraq is going to take it all.  It can’t do that in international law.  It is required to make full compensation to those it expropriates, whose property it expropriates.  Ambassador Kobler has entirely overlooked the rights of the residents of Camp Ashraf to recompense, to compensation for having their property taken from them.

The other criticism I would make is—and I’ve been a United Nations judge and it pains me to criticize the United Nations High Commission for Refugees.  This is a wonderful organization that has done a great deal of humanitarian work.  Why has it fallen down in relation to Camp Ashraf?  It has not, as it has with other groups, given group certification of protected asylum seeker status.  Why not?  It says, “Oh, well, there’s a special rule for those who have been terrorists.  There are special rules for them.  We can’t interview them in Camp Ashraf.  Oh no, we’ve got to take them away from the camp.  We’ve got to give them individual interviews.  We can’t certify them as a group,” even though it is obvious as a group they are asylum seekers and legitimate asylum seekers.  In this case, my view is that it’s not correct in law.  There is no such special rule, but it has caused a terrible go slow.

It has taken the last month, in the last month, the High Commission has processed 30 people.  Thirty people a month.  Just think of it.  Do the math.  It will, on that basis, with 3,400 refugees to process, it will take until 2020.  It will take them eight years at 30 a month.  [applause]  That is totally unacceptable.  Do we have to wait eight years before this problem is solved?  Are we going to have to have meetings here, there, everywhere for the next eight years until all the residents are out of Iraq?  That is preposterous.

There is a duty and it falls particularly on this country.  France, this country, you threw out under—because you buckled under Iran’s pressure in 1986, you expelled the PMOI.  Take some of them back.

There is a duty on the countries that invaded Iraq in 2003 and produced, that invasion produced the problem.  Let’s be frank about it.  We may agree or disagree as to whether that was an unlawful invasion.  That doesn’t matter.  It was the invasion that produced the Geneva Convention rule of protected personage.  It is therefore incumbent on the United States, Great Britain, and I think its minor partner was Spain, but let’s be clear, United States, Great Britain, and Spain who invaded Iraq and led to the al-Maliki regime.  It is, I think, a responsibility on them to take other refugees.  [applause]

So, at the end of the day, we have a regime in Tehran that is led by a man as its supreme leader who is guilty of a crime, one of the worst crimes against humanity committed against the PMOI in 1988.  We have Rafsanjani who is still in high position.  So are most of the death squad judges or the revolutionary guards who did the killings of the prisoners and the diplomats who covered them up.  It’s a terrible story in the UN of how Iran was able to deflect the UN investigation and nothing was done.  This terrible unpunished crime that exists in the world.  It is about time, because the crimes of the German Nazis have been processed.  Bangladesh has a court.  We have Pol Pot’s lieutenants that are on trial in Cambodia.  These old cases are, these cases are older than 1988.  The crimes of the supreme leader and the leaders of Iran are far worse than the crimes of Joseph Kony.  All very well to go viral on the internet in looking for Joseph Kony.  Let’s look for the leadership of Iran that was responsible for the crime against humanity of killing so many thousands of political prisoners in 1988.  That, perhaps, is what the United Nations should be doing, should be setting up a court to try all the Iranian leaders who were implicated in that bloody murder.  And should be because at the end of the day it is mullahs without mercy.  It is people who are guilty of a crime against humanity who cannot—who have shown so little mercy to their own people that they cannot be trusted with a nuclear weapon in their hands.  [applause]