David Amess – MEK Supporters Persecuted in Iran and the U.S. 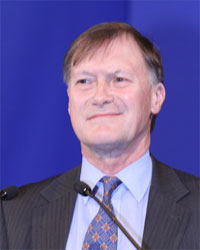 David Amess – March 24, 2012 Paris – If only I could get that sort of enthusiasm from my own electorate.  Ladies and gentlemen, happy …  It is a new day for all of us, but in particular for the residents of Ashraf and Camp Liberty.  May I welcome each and every one of you to this extremely important international conference.  My name is David Amess.  I’m the conservative member of Parliament for south and west, elected to the British Parliament in 1983.  And it is my great honor to be chairing today’s proceedings.  I have been a longstanding supporter of the Ashraf residents for over 20 years.  [applause]  [chanting] You’ll be worn out.  You’ve got to keep the enthusiasm going for four hours and the other speakers will need your enthusiastic applause as well.

So, last year, in such days, the world witnessed a savage massacre in Camp Ashraf in which 36 residents were killed in cold blood only because they were not prepared to surrender to the religious fascism ruling Iran.  These 36 and all those who were wounded and lost their lives after the attack of the eighth of April because of the cruel medical siege are symbols of perseverance for us all today.  They are our inspiration.  So, today, ladies and gentlemen, we pay homage to each and every one of them and let everyone in Ashraf and Liberty know that we will be with them until their final victory, until freedom comes to Iran [applause] and until the global threat posed by the evil regime of the mullahs is removed once and for all.

So, today’s conference, ladies and gentlemen, is aimed to put pressure on the international community and in particular on the United Nations, the United States of America, and the European Union to ensure urgent protection of the residents of Camp Ashraf and Camp Liberty in order to prevent a humanitarian tragedy.  This conference also takes place at a time when the pro Iranian lobby in the United States of America is trying to smear brave US politicians who have been defending our course.  We are very honored to have a number of these officials with us today on our panel.  [applause]

The beginning of the Persian new year was tragic.  The unnecessary loss of a good man, a dedicated man to the cause of freedom and justice.  Doctors said Bardia Amir-Mostofian died of fatigue and more than 48 hours of harassment and duress.  Mr. Mostofian and the UNAMI must be held to account.  We knew that we couldn’t trust the Iraqis to live us to their promises, but the assurances of the UN and the US that they were underlying premises for accepting the unjustified and unnecessary relocation of Mrs. Rajavi and the residents of Ashraf have to be called to question.

Ladies and gentlemen, I’m delighted to see our American friends here after the attempt by the US government to discredit them.  [applause]  Yes, shocking as it might seem, they try to discredit the very foundation of American democracy.  So, it is so nice to see the defenders of those principles have come here today and are telling the American government that they will not be intimidated.  We know very well that the Iranian regime has been using the terror (attack) on the PMOI to extend repression to the rest of the world.  The American government is saying the PMOI does not have the support of the people of Iran.  This is one of the reasons they have put forward as a justification for the continued unjust designation, and what an absurd justification.  If unpopularity would make one person or organization terrorists, I can name countless politicians who have lost elections that can be labeled unpopular and hence, according to the American State Department, terrorists.

But here the State Department is, I believe, ladies and gentlemen, playing a dirty game.  Anyone bold enough to express concern about dubious actions of the State Department with regards to the PMOI is chased by the Treasury and yet the State Department expects the Iranian diasporas express openly their support for the PMOI.  What an irony.  Inside Iran, anyone daring to support them, if caught, would be sent to the gallows almost instantly.  Now in the United States of America, that seems to be the case too.  A different kind of gallows, defamation.

But this time, the State Department is wrong in assuming that the brave backers of the Iranian resistance would go away.  In fact, it is further proof that the generals, the ex-ministers, the ex-directors of CIA and the FBI are all right.  The injustice against the PMOI not only is an injustice to the people of Iran who cry freedom, but it is an injustice to the notion of peace and stability in the Middle East, an injustice to security of our world.  So, only if those so-called reporters who have been repeating the lies would listen to the speeches of these people, they would have thought twice about allowing themselves to be ponies in this dirty game.  And here I want to mention the role of the British Broadcasting Corporation in attacking the proponents of the PMOI’s delisting and Mrs. Rajavi’s third option for democratic change.  The British Broadcasting Corporation has embarked upon a campaign to smear the former US officials who have been bravely defending the PMOI and demanding the State Department respects the rule of law.

This is not new to us.  Our late committee chairman, Lord (Corbett), and I on several occasions met top BBC officials to protest its negative coverage of the delisting process in the United Kingdom.  I’ve also raised the issue in parliament, prompting the British Broadcasting Corporation’s chairman to write back to me.  Unfortunately, the BBC’s role has not been to provide balanced coverage, but rather it plays a biased role to demonize supporters of the PMOI and Ashraf.

I hereby want to declare my support and my colleagues’ support for the brave colleagues in the United States of America who are persisting in their demand that the PMOI is delisted and Ashraf residents be supported.  [applause] I have had published numerous letters in British and American newspapers on this matter and I assure you that I and my parliamentary colleagues are absolutely steadfast in our support for your cause.

So, once again, ladies and gentlemen, I congratulate you all, the audience, for being here, but I particularly want to thank all our panelists for taking the time and trouble to participate in this important conference, for standing on the right side of history [applause] and to pay the price for it.  This is a lesson we all learn from the people of Ashraf.  If you know you are right and are ready to pay the price for it, then nothing can stop you and justice will prevail.  [applause]

So, ladies and gentlemen, I now declare the conference open.  We have any number of very distinguished speakers.  There is a time limit on their speeches and there is a trap door here if they overrun and I will be pulling a cord.  Our first speaker is, of course, Mrs. Maryam Rajavi. [applause]