Maryam Rajavi: The Iraqi government tries to hide behind the empty rhetoric of national sovereignty to justify its brutal and repeated attacks on Ashraf residents

NCRI – On Saturday December 10, on the International Human Rights Day, and on the eve of U.S. President Barack Obama’s meeting with Iraqi prime minister Nouri al-Maliki in Washington DC, in a call to President Obama, American and European dignitaries urged annulment of the December 31 deadline on Ashraf and the forcible relocation of its residents inside Iraq, warning of an impending massacre and human catastrophe in Ashraf.

Below is speech by Mrs. Maryam Rajavi at international conference- Paris:

Today is Human Rights Day. It is the sixty-third anniversary of the day the United Nations General Assembly declared the Universal Declaration of Human Rights as a “common standard of achievement for all peoples and all nations.”

We honor the memory of all the brave women and men who fought for this ideal.

Today we can hear the voice of Professor Kazem Rajavi, the Iranian martyr to the cause of human rights, who once said that we write the true history of human rights with our blood.

Brave heroines and heroes, such as 120,000 Iranians who were murdered by the mullahs in Iran in the past three decades, including 30000  brave political prisoners who were massacred in 1988.

They have made human rights a progressive cause.

The women and men who persist in Ashraf in the most difficult of circumstances in a life and death struggle are at the forefront of this cause.

The message of Ashraf residents who persist and the people of Syria and the Middle East who have risen up is: dictators can no longer drench the peoples under their rule in blood under the guise of national sovereignty.

The progress of human rights today faces a formidable wall of regressive policies and interests.

On the one side there are the dictators that cling to power with suppression and murder. On the other side are governments and politicians who keep silent in the face of this barbarism either out of submission or petty interests.

The world watches the public hanging of Iranian youth in the streets, the merciless torture of political prisoners by Khamenei’s henchmen, and the inhuman siege of Ashraf and the psychological torture of its residents through 300 loudspeakers blaring profanities and threats 24 hours a day. Silence in the face of such crimes has emboldened shaky dictators. Such silence must end.

The world today stands with Ashraf residents despite all the plots and pressures piled upon them by the Iranian regime and its puppet Iraqi government.

The UN Secretary General’s Special Representative to Iraq called for the postponement of the suppressive deadline of the Iraqi government to close Ashraf, in a session of the UN Security Council four days ago. He called for protection of the lives of Ashraf residents and stressed that there can be no acceptable solution without the agreement of Ashraf residents. 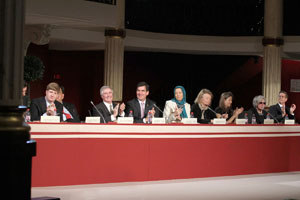 Three days ago, Members of Congress Both parties strongly criticized the US government lack of action and condemned the deadline and the idea of internal relocation.

Yesterday, Baroness Ashton, the European Union High Representative for Foreign Affairs stressed that the priority is the security of the residents.

In recent days, an increasing number of governments, including the Netherlands, Canada, Belgium and the United Kingdom have called on Iraq to extend the deadline.

Previously, the European Parliament, the Parliamentary Assembly of the Council of Europe and many other world parliaments, the human rights committee of the Iraqi parliament, 85 Iraqi MPs, and several leading Iraqi officials such as the Vice-President and Vice-Premier have declared the deadline as invalid and condemned any forcible relocation.

In a declaration signed by 1 million and fifty thousand Iraqis until now, the Iraqi people have clearly said that “the deadline to close Ashraf and forcibly relocate its residents inside Iraq is a prelude to another attack.”

Indeed, the world unanimously bears witness to the innocence and righteousness of the defenseless residents of Ashraf.

If the Iranian Resistance and the Ashraf residents did not base their position on a desire for freedom, truth and justice, then the world would not have supported them as such.

What do the residents of Ashraf want?

Aside from the cancellation of the criminal deadline set by the Iraqi government, what are the undeniable principles that guarantee the minimum measures for protection of the residents?

The first principle is to defend the lives and security of Ashraf residents. Any plan must guarantee the protection of Ashraf residents with acceptable assurances from the UN, US and EU, including with UN Blue Helmet forces or EU forces.

Secondly, the PMOI will not accept any armed Iraqi force inside of its camp. Iraqi forces must not have any role or intervention particularly in the lives and security of 1000 women residents of Ashraf during the time until their transfer to third countries.

Thirdly, as stressed in the report of the UN Secretary General to the Security Council, any solution for Ashraf must be a bilateral agreement between the Ashraf residents and the Iraqi government.

Fourthly, the siege and all pressuring and threatening measures, including judicial warrants for arrest and extradition must be cancelled. 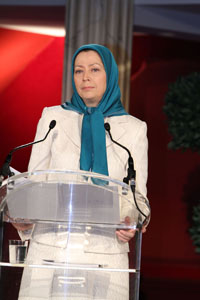 The residents of Ashraf have repeatedly announced that they are ready for any option other than elimination or surrender.
They accepted the European Parliament plan for resettlement in third countries.
They offered seven alternative plans.
They renewed their applications for refugee status and they are now considered as asylum seekers by the UN.

They were always prepared for negotiation and continue to be.

They are ready as in the past months for full cooperation with the UN.

They will accept any expenses for their own protection based on financial assistance from their compatriots. They honor Iraqi sovereignty. But this does not mean that they will go to slaughter on their own feet.

As the UN Secretary General’s representative said in Tuesday’s UN Security Council session, sovereignty can never be an excuse for systematic violations of international human rights, international humanitarian law and refugee rights. These rights of Ashraf residents have been systematically, violently and brutally suppressed during the past three years.

In response to flexibility and cooperation of residents of Ashraf and initiatives by governments and UN as well as to calls by Amnesty International and other human rights organisation the Iraqi government has constantly created obstacles, impeded the UNHCR work and has tried to putting the victims in place of the oppressor and blame the residents for lack of progress.

The Iraqi government has shown until now that it cannot be trusted in any of its promises or commitments to cooperation with the UN.

It has prevented the UN’s effort for verification of Ashraf residents’ refugee status for three months. It completely denies the UN position on recognizing Ashraf residents as asylum seekers with basic protections. It has ignored the UNHCR and UN Secretary General’s Representative’s request to postpone the deadline. It has not accepted the UN High Commissioner on Human Rights’ request for an impartial investigation into the massacre of April 8.

Therefore, the protection of the lives and security of Ashraf residents must be guaranteed by the international community in any solution for their future.

The Iraqi government tries to hide behind the empty rhetoric of national sovereignty to justify its brutal and repeated attacks on Ashraf residents, including the two massacres in Ashraf.

What does it say about Iraqi sovereignty that US commanders report that the Iranian regime’s Qods Force commander directs policy in Iraq? Whose sovereignty is that?

Since the transfer of security responsibility of Ashraf to the Iraqi government, the entry of goods into Ashraf is met with the strict and repeated control of security forces.

The Iraqi government has instituted the rules of a prison in Ashraf under the guise of exercising national sovereignty. In the name of sovereignty, they have converted the hospital attached to Ashraf to a torture center.

Yesterday, the Iranian regime dispatched a gang of its mercenaries associated with the Qods Force to the gates of Ashraf under Iraqi support to launch a demonstration in which they threw rocks and bricks at Ashraf residents and reacted to world solidarity with Ashraf residents.

So if Iraqi sovereignty is not an excuse for doing Tehran’s bidding in killing Ashraf residents, then what is it?

In particular, after Maleki’s trip to the United States, the US will be especially responsible for any crime committed by Maleki’s government against Ashraf residents.

The US bears responsibility because the current crisis in Ashraf is a direct result of the US war in Iraq.

The US bears responsibility because it signed an agreement with each and every resident of Ashraf pledging to protect them.

The US bears responsibility because it transferred security of Ashraf to a government whose enmity with Ashraf residents was clear.

The US bears responsibility because it is a signatory to the UN declaration of RtoP (Responsibility to Protect) and it is obligated to intervene to prevent a crime against humanity in Ashraf.

The US bears responsibility because it played a major role in helping form the current Iraqi government.

The US bears responsibility because it should not sit idly by in the face of a preventable crime from a moral and humanitarian point of view.

Finally, I should point out that if the US again fails to honor its legal and moral obligations it will be the best reward to the mullahs. The American people will not likely forgive such a thing in the upcoming US elections.

The safeguarding of the lives of Ashraf residents is a clear issue.

Their right to life is not a complex or undoable matter.

As the UN Secretary General’s Representative said in the recent UN Security Council session, Ashraf residents’ lives must be protected.

Unfounded and outdated analysis of the State Department experts should be thrown away.

End this complacency in the face of the Iranian mullahs’ sinister will and their Iraqi proxies. They want to give themselves the right to commit crimes against humanity in the name of national sovereignty. Do not surrender to their demands. Do not be complicit in the killing of the sons and daughters of the Iranian people, and take action on your obligations under international law and the principle of “Responsibility to Protect”!

Dear friends,
On the international day of human rights while the long enduring pains of oppressed people of Iran continues in prisons and in all over the country, we strongly believe resistance and perseverance of the Iranian people will overcome the evil of repression. The enchained angel of freedom will be relapsed and the Iran’s betrayed human rights will revive.

I would like to end my remarks with unending praise for the brave Iranians who have for months participated tirelessly in sit-ins in Geneva and Washington DC and all through the world in this campaign.

I remind them of Massoud Rajavi, the Iranian Resistance leader’s remarks when he said: “You represent the flames of honor and resistance of an enchained nation.” And as he said, I too say: “The force of our nation’s conscience and resistance will finally triumph.
I thank you all.

Previous articleHadi al-Ameri, terrorist in charge of the Badr group of the Qods force accompany al-Maliki on US visit
Next articleIraqi Prime Minister admits that killing and suppression of Ashraf residents was dictated by the Iranian regime