Mitchell Reiss: We are all united in calling for the State Department to immediately delist the MEK 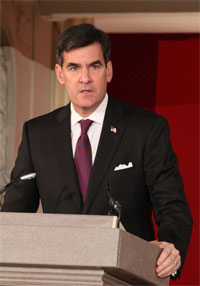 NCRI – In an international conference held in Paris on Friday, January 6, at the invitation of the CFID (French Committee for Democracy and Human Rights in Iran), dozens of distinguished American and European dignitaries warned of obstructions and non-cooperation by the Iranian regime and Government of Iraq in guaranteeing a peaceful solution for Camp Ashraf, where members of the Iranian opposition reside in Iraq.

Below is speech by Ambassador Mitchell Reiss:

Thank you Monsieur Minister.  Madame Rajavi, distinguished guests, members of the audience and those watching around the world, ladies and gentlemen, fellow panelists, and most importantly, the residents of Camp Ashraf, it is an honor to be here today.  It is an honor to be here today and once again raise our voices to draw the world’s attention to the situation at Camp Ashraf.  As you know, the situation has been changing rapidly in the past few weeks.  December 31 was the artificial deadline established by Prime Minister Maliki for evacuating Camp Ashraf. 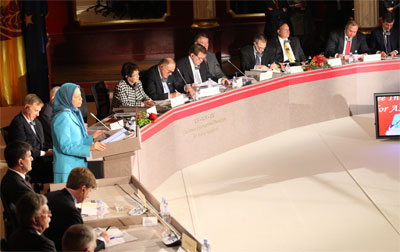 Many of us feared that we were heading towards another violent confrontation and the deaths of innocent lives as we saw last April.  A humanitarian catastrophe was averted through the extraordinary leadership of Madame Rajavi and the willingness of the Camp Ashraf residents to give up their home of 26 years.  Madame Rajavi has worked tirelessly these past few weeks to do everything in her power to protect the people at Camp Ashraf, often having to make difficult decisions under great time pressure on matters of life and death.  The residents of Camp Ashraf could not ask for a better leader.  Her courage and determination continue to serve as an inspiration to us all.

We know that the situation remains grave and yet there is hope.  Last September, I described to you some political and legal trends that were starting to help our cause.  I said that these trends favored the forces of justice and freedom in three important ways: at the United Nations and in European capitals, with the media’s coverage of this story, and within the U.S. government.  I am pleased to report to you today that these trends have continued to mature and that there has been progress in all three areas.

Under Madame Rajavi’s leadership and with your help Camp Ashraf has become an international issue.  It has received the attention of the UN Secretary General, the UN Security Council, heads of state, the European Union, national parliaments, and major human rights organizations.  The international media is finally starting to report on this story and report the facts accurately.

Further, there is now a formidable bipartisan political coalition in the United States that supports this cause.  Senior politicians, military officers, national security experts, ambassadors and governors, as well as members of the Senate and the House of Representatives are all united in calling for the United States to take full responsibility and fulfill its pledge to safeguard the Camp Ashraf residents.

Our work is not yet finished.  We will only be finished when every single resident of Camp Ashraf with no exception, is safe, secure, and free. Our being here today at this conference is another step forward towards our goal.  It is therefore my great pleasure and great honor to introduce our first speaker, Madame Rajavi.

Previous article
Warning on expected execution of imprisoned family members of Ashraf residents and a call to save their lives
Next article
Iran: 43 executions since the beginning of the year