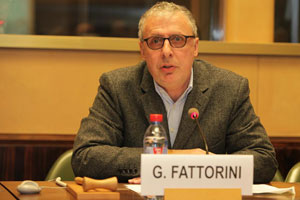 Speech by Gianfranco Fattorini, former Co-Chair of the French NGO “Movement against Racism and for Friendship among the Peoples” (MRAP) at the event entitled ‘Right to access to medical care’ held at the UN Geneva headquarters on February 20, 2015 and he moderated*:

On behalf of the organizations that convene this roundtable – the Women Human Rights International Association, International Educational Development, Danielle Mitterrand’s foundation – France Libertés, and the Nonviolent Radical Party, Transnational and Transparty (PRNTT) – I welcome you to this roundtable discussion which will focus on the access to medicine  in the Camp Liberty near Baghdad airport.

Why this particular issue? This is where thousands of Iranian asylum seekers have been in Iraq for many years and they have suffered repeated attacks by the Iraqi forces who are supposed to protect them.

And during these attacks tens have been killed and hundreds injured and often do not have access to care and medication.

In fact, all these people were once northeast of Baghdad in Camp Ashraf and from the moment the US forces withdrew from Iraq and the new Iraqi authority took power, they did everything they could to evacuate these people from Camp Ashraf and forcibly transferred them under duress to Camp Liberty which was a US base next to Baghdad airport.

Since then, these people are subjected to a blockade by the Iraqi authorities, who control the camp.
The blockade includes infrastructure in Camp Liberty.

In Camp Ashraf these people had complete medical facilities including an operating room that they asked to be transferred to Camp Liberty in Baghdad, but that the Iraqi authorities refused.

So any medical infrastructure has remained in Ashraf and asylum seekers in Camp Liberty do not have access to medical care and medicine which they should according to the obligations of international law, including international humanitarian law.

Among them there are 907 people, of which 245 are women, who are asking for emergency treatment and 117 of them have been waiting for care since 2012.

Because of this medical blockade more than twenty people have died from diseases that could be treated.

For your information, the medical costs of asylum seekers at Camp Liberty between 2013 and 2014 were $ 4 million and $754,000. These costs were covered in full by the Iranian resistance.

—
Background: Camp Liberty located near Baghdad International Airport houses nearly 3,000 Iranian dissidents including members of the Iranian opposition movement the People’s Mojahedin Organization of Iran (PMOI/MEK) who have been living in Iraq for decades.