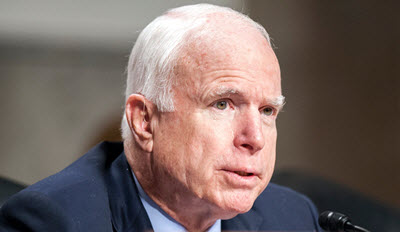 The following is the full text of his statement issued on Thursday:

STATEMENT BY SENATOR JOHN McCAIN ON JULY 4TH ATTACK AT CAMP LIBERTY
Washington, D.C. – U.S. Senator John McCain (R-AZ) released the following statement today on the July 4th attack at Camp Liberty:
“I strongly condemn the July 4th rocket attack that injured dozens of residents at Camp Liberty. The Government of Iraq should provide immediate medical and emergency assistance to the victims, launch a full and impartial investigation of the attack, and bring those responsible to justice.
“Sadly, this is not the first time the residents of Camp Liberty have been the victims of horrific attacks. And I remain deeply concerned about their safety. While I am pleased by the State Department’s effort to expedite the residents’ resettlement to a safe location, this latest attack demonstrates the need for the United States and Iraq to do more to ensure the security of Camp Liberty during this process.
“I strongly urge the State Department to work together with the Government of Iraq to provide additional security to Camp Liberty and ensure continued and reliable access to food, clean water, medical assistance, electricity, and other supplies necessary to sustain the residents during the resettlement process. The State Department and Government of Iraq should also work with the United Nations High Commissioner for Refugees (UNHCR) to prevent Iran from disrupting the resettlement process and attacking residents. Such attacks must not be tolerated, and those responsible must be held accountable.”
###