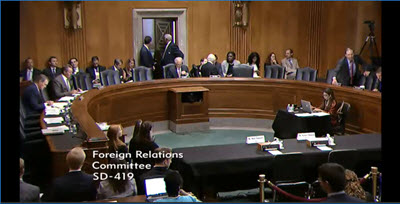 NCRI – The United States Senate Committee on Foreign Relations unanimously backed a resolution last week regarding the rights of members of the main Iranian opposition group, the People’s Mojahedin Organization of Iran (PMOI or MEK), in Camp Liberty in Iraq.

The text of the resolution was submitted to the Senate committee by Senator John McCain (R-AZ).

The resolution was passed unanimously at a session of the Senate Committee on Foreign Relations, chaired by Senator Bob Corker (R-TN), on July 14, 2016.

Also at the meeting, Senator Jeanne Shaheen (D-NH) requested to be added as a co-sponsor of S-Con Res. 42, adding that she appreciates that the committee was endorsing the text at this time.

Senator Bob Menendez (D-NJ) told the meeting: “I appreciate that we are moving the Resolution calling on the Government of Iraq, the United Nations, and the United States government to commit to expediting a workable resettlement process for the people of Camp Liberty. We are reminded of the danger they face, just this past 4th of July, when attacks were once again upon Camp Liberty, as a reality of everyday life there.”

Senator Menendez was referring to a terrorist rocket attack on Camp Liberty on July 4 by a militia affiliated to the Iranian regime in Iraq.

He added: “It is the United States, when we invaded Iraq that went to the MEK and said that we want you to give up your weapons and in return we will guarantee you your security. Well they did that and much more. They gave us information about Iran’s nuclear program, they have continued to do so. And yet we have not, from my perspective, done what is necessary to secure the guarantee that we gave. I hope that this resolution moves it forward so that they could be resettled safely outside of Iraq and continue to enjoy the freedoms of liberty.”

The U.S. House of Representatives Foreign Affairs Committee on May 18, 2016 unanimously approved and referred to the House Floor a similar bipartisan resolution calling for “safety and security” of the members of the main Iranian opposition group People’s Mojahedin Organization of Iran (PMOI or MEK) living in Camp Liberty, Iraq.

The following is the text of the Senate resolution:

To express the sense of Congress regarding the safe and expeditious resettlement to Albania of all residents of Camp Liberty.

Resolved by the Senate (the House of Representatives concurring),

SECTION 1. Sense of Congress on the safe resettlement of Camp Liberty residents.

It is the sense of Congress that the United States should—

(1) work with the Government of Iraq and the United Nations High Commissioner for Refugees (UNHCR) to ensure that all residents of Camp Liberty are safely and expeditiously resettled in Albania;

(3) urge the Government of Iraq to take prompt and appropriate steps in accordance with international agreements to promote the physical security and protection of residents of Camp Liberty during the resettlement process, including steps to ensure that the personnel responsible for providing security at Camp Liberty are adequately vetted to determine that they are not affiliated with the Islamic Revolutionary Guard Corps’ Qods Force;

(4) urge the Government of Iraq to ensure continued and reliable access to food, clean water, medical assistance, electricity and other energy needs, and any other equipment and supplies necessary to sustain the residents during the resettlement process;

(5) work with the Government of Iraq to make all reasonable efforts to facilitate the sale of residents’ property and assets remaining at Camp Ashraf and Camp Liberty for the purpose of funding their cost of living and resettlement out of Iraq;

(6) work with the Government of Iraq and the United Nations High Commissioner for Refugees (UNHCR) to ensure that Camp Liberty residents may exercise full control of all personal assets in Camp Liberty and the former Camp Ashraf as the residents deem necessary;

(7) assist, and maintain close and regular communication with the UNHCR for the purpose of expediting the ongoing resettlement of all residents of Camp Liberty, without exception, to Albania;

(8) urge the Government of Albania, and the UNHCR to ensure the continued recognition of the resettled residents as “persons of concern” entitled to international protections according to principles and standards in the Convention Relating to the Status of Refugees, done at Geneva July 28, 1951, and the International Bill of Human Rights; and

(9) work with the Government of Albania and the UNHCR to facilitate and provide suitable locations for housing of the remaining Camp Liberty residents in Albania until such time when the residents become self-sufficient in meeting their residential needs in Albania.