NCRI – Al-Arabiya television last week aired an interview with Mohammad Mohaddessin, Chairman of the Foreign Affairs Committee of the National Council of Resistance of Iran (NCRI), about the situation of the Iranian opposition.

Mr. Mohaddessin said he believes that the mullahs’ regime cannot be reformed as it is based on the pillars of absolute repression and support for terrorism and fundamentalism.

Click below to watch the 23-minute interview with English subtitles. 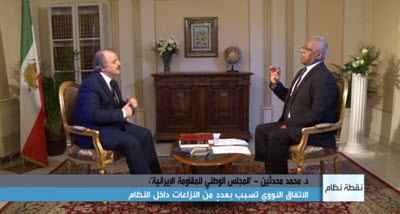