NCRI – The U.S. government must live up to its promise of protecting thousands of members of the main Iranian opposition group People’s Mojahedin Organization of Iran, MEK (or Mujahedin e Khalq, MEK), who are based at Camp Liberty, near Baghdad, a hearing of the U.S. Senate Committee on Armed Services was told on Wednesday.

The hearing, entitled Iranian Influence in Iraq and the Case of Camp Liberty, was aired live on the Senate website.

Senator John McCain (R – AZ), Chairman of the Committee on Armed Services, warned that PMOI (MEK) members in Camp Liberty have been constantly victims of harassment and rocket attacks by agents of the Iranian regime and Iraqi militia groups.

Sen. Jack Reed (D – RI), Ranking Member on the committee, said: “The Iranian dissidents at Camp Liberty are in an increasingly perilous situation, having repeatedly come under attack. These horrific attacks, which have killed more than 100 MEK members since 2009, clearly indicate the threat to this group from Iran and Iranian-backed militia seeking to eliminate and silence these dissidents.”

The Senate committee heard from General James Jones, former National Security Advisor to President Barack Obama; Hon. Joseph I. Lieberman, former U.S. Senator; and Colonel Wesley Martin, former Commander, Forward Operating Base Ashraf, all of who warned that the PMOI (MEK) members at Camp Liberty were at risk of a massacre at the behest of Iran’s fundamentalist regime. 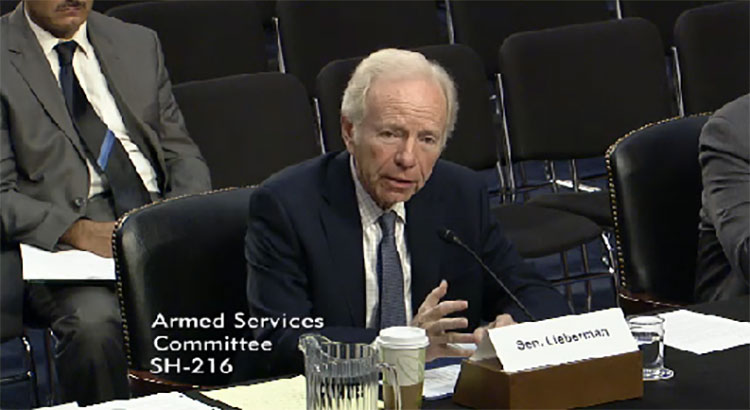 The PMOI (MEK) “are not only the enemy of our enemy; these people are our friends,” he said, adding that the PMOI (MEK) has provided extraordinary information on the Iranian regime’s meddling in Iraq and nuclear proliferation.

“They believe in freedom. They are a moderate Muslim group. They are quite refreshingly led by a woman who has put out a 10-point plan” which supports separation of church and state, complete gender equality, commitment to the Universal Declaration of Human Rights, peaceful coexistence with its neighbors and a non-nuclear Iran.

“We ought to be supporting” the PMOI (MEK) and the National Council of Resistance of Iran (NCRI). “They deserve such support. … It would threaten the survival of the regime which is a very unpopular regime in Iran”.

Sen. Lieberman urged the U.S. government to take up protection of the Camp Liberty residents.

Gen. Jones told the committee: “The People’s Mujahedin of Iran (referred to as MEK or PMOI) are exiles from Iran who have lived in Iraq since the mid-1980s. They oppose the regime in Tehran which has helped facilitate a campaign of harassment, intimidation, and murder against their encampment with the complicity of Iraqi authorities–despite America’s promise to protect the men, women, and children of Camp Ashraf, now residing at Camp Liberty.” 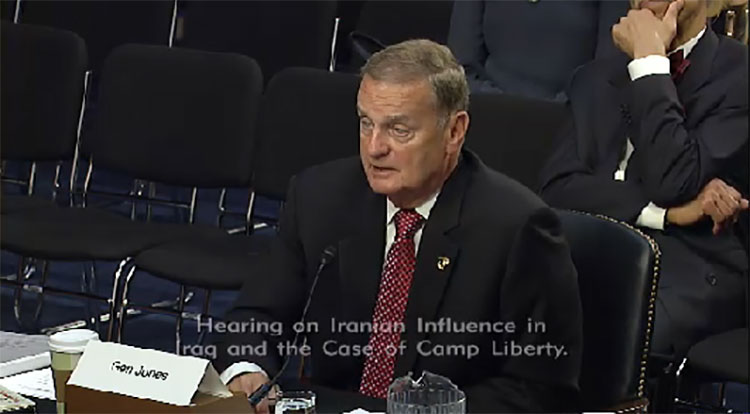 “You know the grave implications of Iranian efforts to shore up the Assad dictatorship and to prosecute the malignant Shiite-Sunni conflict in Iraq and foster its reach in Lebanon, Gaza, and Yemen. What is not as well know is that part and parcel of Iran’s subversive program in Iraq has been the persecution of nearly 3,500 Iranian objectors to the regime housed first at Camp Ashraf in Diyala Province and now at Camp Liberty in Baghdad.”

“This is a group that has consistently opposed the Iranian regime and resided at Camp Ashraf in Iraq since 1986. During Operation Iraqi Freedom the group welcomed American troops, voluntarily disarmed.

“In exchange, the United States promised to ensure the refugees’ protection. This solemn obligation transferred to the Iraqi government as part of its sovereign commitments and the terms of the 2009 U.S.-Iraq Status of Forces Agreement.”

“As the timeline shows, what followed these commitments has been a litany of bloodshed and mistreatment at the bidding of the Iranian regime complicit with elements of the Iraqi government all too eager to accommodate Iranian wishes.”

Gen. Jones pointed out that the Iraqi officers who led the deadly attacks on Camp Ashraf are the ones who are now running Camp Liberty.

Gen. Jones added that there have been many other episodes of “mistreatment and threat” inflicted on the PMOI (MEK) during their tenure at Camp Ashraf and over the course of their time at Camp Liberty.

“The primary problem, however, has been our government’s exceedingly slow and seemingly indifferent response to our commitments and the refugees’ dangerous situation.”

“It is time our government realized that the Iranian resistance has been misunderstood for many years in Washington due to false information, and they should be treated the same as our government would treat the political opposition from any country. If there are separate rules that should apply to the MEK, they should be preferential, not punitive measures, reflecting the fact that the resistance was the first to reveal Iran’s secret nuclear enrichment activities in 2002 and then they turned over all their weaponry to American forces in 2003 in return for a commitment from the United States under international law that they would be protected. Every time we have fallen short of fulfilling this commitment, our country’s reputation has been diminished, and Iran’s regime has gained leverage against voices calling for democratic reform.” 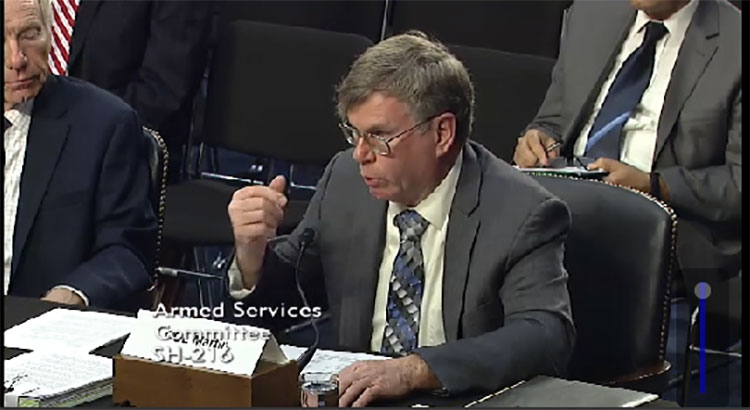 Col. Martin gave first-hand account of his experiences with the PMOI (MEK) from the time he was stationed at Camp Ashraf as well as his discussions with U.S. State Department officials on the need to ensure protection at Camp Liberty.

On a daily basis Camp Liberty residents are harassed by the Iranian regime’s agents, he said, adding that the PMOI (MEK) members in the camp each carry a “protected persons” card issued by the U.S. military which requires Washington to take action to prevent harm to them.