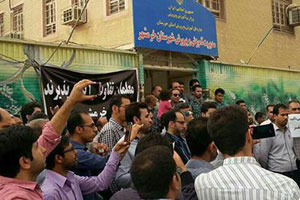 NCRI – Teachers across Iran rallied on Thursday against the fundamentalist policies of the mullahs’ regime targeting Iranian educators.

Large numbers of teachers in Tehran and other cities took part in protests against the regime despite a heightened crackdown by the authorities.

Teachers, denouncing the detention of their colleagues, held signs reading “Imprisoned teachers must be freed” and “Teachers, rise up against discrimination.”

In August, a deputy in the regime’s Ministry of Education admitted to holding over 1,000 teachers in prison. Mostafa Nasseri declared this shocking statistic quoting the state’s Prisons Organization.