Who Will be Held Accountable? Maliki or Obama? 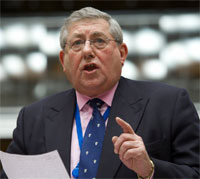 HUFFINGTON POST – By Brian Binley  December 21, 2011
There is no doubt that the July 2009 and April 2011 massacres in Camp Ashraf, home to 3400 members of the opposition People’s Mojahedin Organization (PMOI/MEK) in Iraq, were ordered by none other than Nouri al-Maliki the Iraqi Prime Minister. Iraqi officials and military commanders have consistently stated that such was the case. As a result, al-Maliki has been summoned to appear before the Spanish National Court to answer the charge of “Crimes against humanity”.

Anyone who witnessed those bloody attacks was shocked to hear President Obama welcoming al-Maliki to the White House, on Monday last (12 December) and could well question why such a man was invited.

Al-Maliki, who owes his post to the support of the Iranian regime, has openly signed a bilateral government agreement obligating himself to close the camp by the end of 2011 thereafter relocating the residents throughout Iraq, thus dispersing the opposition away from watchful eyes of the rest of the world. By using ‘sovereignty’ as an excuse, Iraq feels it has the right to implement this plan.

However, ‘Iraqi sovereignty’ is only a pretext to carry out the will of the Iranian regime by annihilating the members of the best known Iranian opposition whose only objective is to remove the mullah’s regime in Tehran by democratic means and replace it with an elected secular administration committed to democracy and freedom.

Since the beginning of 2009, when responsibility for the security of Ashraf was handed by the Americans to Iraq, Al-Maliki’s government has been carrying out an organized government-led campaign against Camp Ashraf under the pretext of sovereignty. The Iraqi government continuously attempts to cover up and justify its repetitive violence against Ashraf residents – including the two abovementioned massacres – on the grounds of sovereignty.

Are the 300 loudspeakers installed around Ashraf by the mullahs’ Ministry of Intelligence for the purposes of psychological torture, designed to enhance Iraqi Sovereignty. Are the surveillance towers and satellite signal jamming devices branded with the Revolutionary Guards logo a sign of Iraqi sovereignty? The daily needs of the residents inside the camp are now in the hands of Iran’s security agents. The residents have been denied proper medical treatment for two years, leading to the deaths of 10 patients to date. The Iraqi government has literally enforced prison regulations on Ashraf and its residents. Does this inhumane treatment enhance Iraqi Sovereignty or Iran’s ambitions. The answer, to my mind, is clear.

Let me now turn to President Obama. Welcoming Al-Maliki to the White House was a deplorable error which could pave the way for yet another atrocity for Ashraf residents. Al- Maliki should have been told that the international community would no longer tolerate the Iraqi Government acting as the Iranian regime’s puppet and executing the orders of Tehran’s mullahs in Baghdad. And President Obama should have made it clear that he did just that. But his record on the issue doesn’t give grounds for confidence.

The US government has a responsibility to protect Ashraf residents not least because the current crisis in Ashraf is the immediate result of the coalition invasion of Iraq. The US signed an agreement with every single Ashraf resident in 2004 to provide them protection. However, in defiance of international laws, it handed Ashraf’s protection over to a government whose proven enmity against Ashraf residents is now clear. The US also has a moral and humanitarian responsibility to do all it can to prevent another massacre. If the US fails to rise to its legal and moral responsibilities it would simply be playing into the mullahs hands. Al Maliki’s first visit to Washington places responsibility for future Iraqi actions firmly in the hands of the US Government. If the US Government fails the people of Ashraf in this respect the President will be the one who must answer to the court of public opinion for that failure.