Amid Factional Feuds, Iran Officials and Media Accuse Each Other Of Economic Crisis 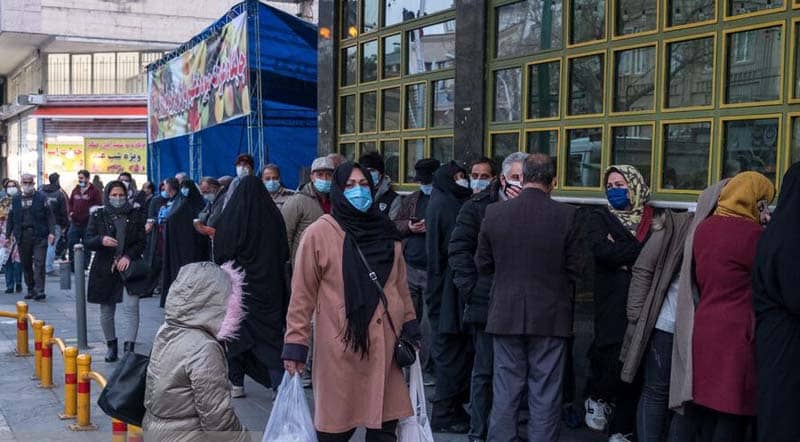 The Iranian regime’s infightings have increased in recent days due to the mullahs’ domestic and international crises. Amid their factional feuds, the state-run media and officials acknowledge how the regime has destroyed Iran’s economy.

“The ongoing skyrocketing prices of the red meat and poultry in recent months have prevented Iranian families from having these necessary food items,” said Hossein Raghfar, one of the regime’s economists, according to the state-run Tasnim news agency on Monday.
“Due to the wrong economic policies, some [officials and their relatives] have become obese and lost their human values and have become big machines for wasting resources and consumption, Raghfar added.

“There is a lot of pressure on needy families and the poor. Continuation of these conditions is not possible unless immediate action is taken in this regard,” Raghfar warned the regime.
Iranians now grapple with poverty. They stand in long lines for hours, amid the worsening Covid-19 outbreak, to purchase poultry at government-set prices. While mullahs and their apologists depict Iran’s economic crisis on international sanctions, state-run media admit that corruption and wrong economic policies are the real reason for damaging Iran’s economy.

“One of the most important factors in creating structural inflation in the Iranian economy, which has led to a decrease in people’s purchasing power and caused poverty is the irregular increase of liquidity. Since the liquidity is not used in production, it causes skyrocketing prices and rising inflation rate,” Tasnim news agency wrote on Sunday.
Poultry is one of the people’s essential food items that is becoming more expensive daily.
“in a situation that people with low-income, workers and retirees have not had read meat for more than two years, their only option, which was the poultry, is now removed from their table due to the skyrocketing prices,” wrote the state-run Sabzineh daily on Wednesday.

“The unequal distribution of wealth widens the class divide. We are witnessing people [literally] sleeping in graves and water streams. How people make their ends meet? This social gap makes people poorer,” the state-run Eghtesad-e Pouya acknowledged a part of the Iranian people’s dire consequences on Wednesday.

“Iranian [people] lost their life savings in the stock market. The country’s capital was plundered under the pretext of providing foreign exchange for basic goods, and large rents were created from the place of recklessness,” said Mehdi Bagheri, a member of the regime’s parliament. “Mismanagement became so rampant that the system has to deal with issues as low as shortage of poultry, oil, eggs, and so on,” he added amid the regime’s infightings, according to the state-run Emrooz daily on Wednesday.

Iran’s economic and social crises have turned society into a powder keg. Millions of Iranians living under the poverty line, unemployed youth, and deprived workers consider the regime the real enemy. The army of unemployed and starving people terrifies the regime.

“Today, despite bragging about our power, we are not able to fulfill people’s basic needs. A population of 4 to 5 million unemployed people, mostly youth, is threatening [the regime’s] security,” wrote the state-run Mostaghel daily on Sunday.