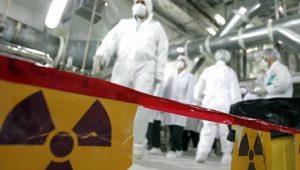 In an attempt to blackmail the international community, Iran’s religious dictatorship stated in a letter to the International Atomic Energy Agency (IAEA) today, “It will begin enriching uranium up to 60% purity.” Abbas Araghchi, the clerical regime’s Deputy Foreign Minister and chief nuclear negotiator, wrote, “Another 1,000 centrifuges with 50% more capacity will be added to the existing machines in Natanz, in addition to replacing the damaged machines,” reported state-run news agencies, today.

On February 22, 2021, Addressing the clerical regime’s Assembly of Experts, Khamenei had said: “Iran’s enrichment threshold will not be 20%, and the purity can increase as needed anywhere in the country, i.e., Enrichment may increase up to 60% for nuclear propulsion or other tasks.”

In blatant violation of the nuclear deal, the clerical regime began enriching 20% and producing uranium metal in January.

By enriching uranium to 60 percent purity and increasing the number of centrifuges, the mullahs’ regime aims to blackmail the international community and extract more concessions in the ongoing negotiations. These make it palpably clear that the regime has never abandoned the project to build a nuclear bomb.

Adopting a decisive policy vis-à-vis the ruling theocracy and the reinstatement of six UN Security Council Resolutions, a complete halt to enrichment, shutting down its nuclear sites, and anytime, anywhere inspections are imperative to preventing the religious fascism from obtaining nuclear weapons.

Last year on June 20, Mrs. Maryam Rajavi, the President-elect of the National Council of Resistance of Iran (NCRI), stated: “The policies and actions of the mullahs’ regime, five years after the nuclear deal with the P5 + 1 countries, leave no doubt that this regime has never given up the project to acquire an atomic bomb and continues the deception and concealment. The regime uses all the facilities and concessions that the nuclear deal has given to pursue terrorism, foreign warfare, and domestic repression.”

Secretariat of the National Council of Resistance of Iran (NCRI)
April 13, 2021

Previous article
Iran: Eight Executions in Six Days
Next article
Amid Factional Feuds, Iran Officials and Media Accuse Each Other Of Economic Crisis