Despite the Lifting of Sanctions, Why Iran’s Economy Has Plunged Into Recession? – Part 1 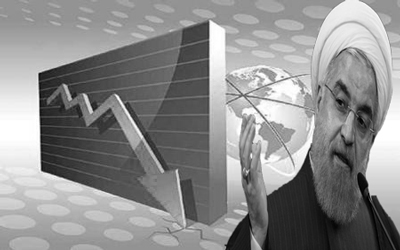 NCRI – A year after signing the nuclear deal, while significant problems such as export restrictions and the prohibition of the international bank transfer (swift) have been resolved a transparent atmosphere is created to identify the radical economic problems of Iran.

In other words, the question is why the recession is becoming deeper while the sanctions are lifted and the international transaction with Iran has been opened. Undoubtedly, the significant decrease in the oil price has reduced the government revenue and it has also placed pressure on Iran’s economy over the past year. By looking thoroughly, other fundamental problems are identified as well which stem from the Iranian government’s policy.

These problems lay into two categories:

On June7th, the Ministry of Foreign Affairs in Iran sent an official report to parliament regarding the results of the implementation of nuclear deal. In the report, with an unprecedented clarity it is stated that the biggest problem in the country is the lack of security and stability. The report reads:”the biggest challenges and problems that The Iran Deal’s Joint Comprehensive Plan of Action (JCPOA) faces is the creation of an atmosphere of confidence and assurance for the foreign parties. The confidence in the interactions and the atmosphere is the most important factor in calculating the costs and benefits of the trading enterprises that are dealing with Iran.”

If a trading enterprise figures out that the market does not provide a secure environment for investment, doing business or any other economic interactions, undoubtedly neither does it make an investment nor transfers the technology, and will not engage in big investment projects. In the turbulent situation of Middle East, and in an atmosphere of uncertainty over the commitment of all parties to Iran Deal it is typical that many trading enterprises react hesitantly.”

“The lack of security and stability”, the lack of “confidence and an assuring atmosphere,” in “a chaotic and capital flight situation” and existence of “fear and wariness of interaction with Iran”, which are stated by the Iranian ministry of foreign affairs as the main causes for failure in attracting the foreign investment as well as cooperating with the international companies. Have political, legal and economic aspects.

Explanation of most important Factors:

A. The domination of the Guardianship of the Islamic Jurist

The economic consulting firm “Control Risks” published a report stating that despite the implementation of the nuclear deal between Iran and world powers, the Iranian markets remain risky. Apart from the danger of imposing sanctions again, the opaque structure of ownership and unpredictable meddling of the governmental institutions in the economy are mentioned in the report as the economic stakes.

Regarding the engagement of governance institutions, undoubtedly the most significant factor is the Guardianship of the Islamic Jurist, its subdivisions such as IRGC, police, Basij, The foundation called ‘Headquarter of Execution of Imam Khomeini’s Order’(EIKO),Mostzafan Foundation and Astan Quds Razavi. These intuitions have seized the most of Iran’s economy, particularly manufacturing firms, commercial banks, monetary institutions and economic markets. The domination of these institutions which finance the military operations in Syria, Iraq, and Lebanon and provide the enormous cost of security controls in Iran, has made them the counterpart of all foreign trades.

Pierre Fabiani The former head of “Total” in Iran and the current vice president of GEP-AFTP (French association of companies and professionals in O&G) stated: “I would recommend to all our companies to investigate thoroughly if the potential Iranian partners are affiliated with the Iranian Revolutionary Guards Corps (IRGC) or not and if so, they should withdraw any partnership with them.”

The French daily ‘Le Monde’ quoted envoy in Iran who had investigated the issue and drew conclusion based on his objective observations that: “there are no significant companies in Iran except those which are controlled by the Iranian Revolutionary Guards and Religious foundations.”