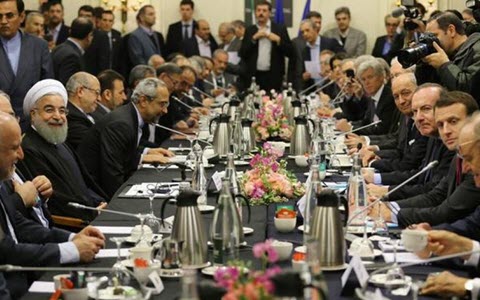 NCRI – After the initial euphoria caused by the lifting of the sanctions on Iran, French companies interested in working with Iran are now in a state of despair and disappointment, according to the French Economic publication, the Challenge.

The French publication wrote: “The official lifting of sanctions against Iran in January 2016 created great hope for French companies. Nearly two years after that date, we are now seeing disappointment among the French businessmen and industries.”

“We must say that the disappointment is in harmony with the hopes that Iran’s official lifting of sanctions in 2016 has made. At that time, most observers of the Iranian paradise market hardly said that having a population of 80 million could have put forward the most attractive markets in the world.”

At the time, during the visit of Hassan Rouhani to Paris in late January 2016, Pierre Gattaz, President of the Mouvement des Entreprises de France (MEDEF) said: “It is now our turn the French to have a quick move.” Nearly two years later, early optimism turned into a sort of frustration and disappointment among French businessmen.

“Total” has ruined the oil dream

Regarding the investment of the French “Total” company in Iran, it is worth recalling that the state-run Javan newspaper, affiliated to IRGC, quoted the president of this company on November 15, as saying: “If there is a sanctions regime for Iran, we have to scrutinize it. We work with the U.S. and we have investments in the U.S. which will further increase our capital in the United States.”

He also said last month that “if U.S. sanctions have laws that force us to retreat, we will have to comply. All in all, if we can, we will do it, and if we cannot, we will stop it. At the moment, Total is weighing the options, and everything depends on the US Congress, which decides what sanctions will be there and what type of sanctions will be applied.”

This concern grows when it comes to the position of the French President over sanctions against (Iranian regime’s) missile capability, but the Ministry of Petroleum, while repeatedly advocating the agreement, has acknowledged that the deal could prevent the imposition of new sanctions, and in fact, with the economic attraction and the mobilization of Oil giants, a barrier against sanctions can be created. This argument, however, is now losing ground.