Iran: 100 out of 180 tea processing facilities shut down 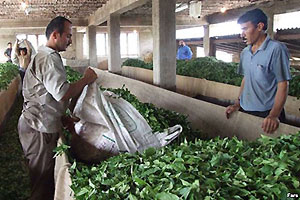 NCRI – On hundred tea processing facilities have closed down and only 80 are remaining working half time in Iran.

The deputy director of a semi-official tea producers’ union told state-run ILNA news agency that lack of support towards the factory and tremendous smuggling of tea has caused a lot of loss and harm to factories producing tea.

“More than 100 thousand tons of tea is smuggled to the country. This is while tea farms have the potential to produce the domestic need but due to the negligence of the officials and the lack of payment to the farmers, the production of the country’s green tea has greatly reduced from the previous years.”