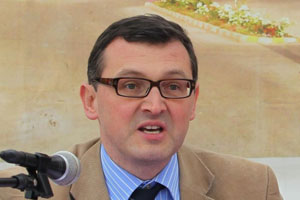 NCRI – Belgium Senator Karl Vanlouwe, the president of Foreign Affairs and Defense Committee in the Belgian Senate has written to the U.S. Secretary of State John Kerry urging him to “call the Iraqi government to immediately release these hostages and put them under UN protection.”

Senator Vanlouwe wrote: “Seven innocent refugees including six women have been taken hostage by the Iraqi forces last week and are reported to be on their way to be extradited to Iran.”

The text of the letter is published in Senator Karl Vanlouwe’s website.

Previous article
Iranian regime trains fighters near Tehran to fight for Assad
Next article
Iran: 100 out of 180 tea processing facilities shut down