Iran: 5,000 mine workers go on strike demanding release of co-workers 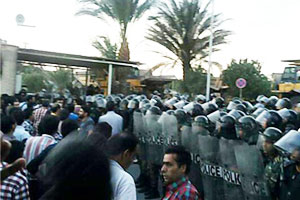 NCRI – Some 5,000 Iranian mine workers went on strike on Tuesday in central province of Yazd demanding the release of two workers who had been arrested by the State Security Forces.

The two workers of Bafq Iron Ore mine were arrested at the request of the mine’s management. The forces had planned to arrest 16 other workers who also had been involved in a 40 day strike in May.

May strike ended after the authorities pledged to meet their demand. The worker wanted the plans for transferring 28.5 percent of the mine’s share to private sector be cancelled.

The workers and their families, who form the half of the population of Bafq, demanded that the profit from the shares be spent on improving the living conditions in the city.

Striking workers also had demanded the resignations of the mine’s director and that workers receive job security guarantees.

The strike ended when the governor of the province promised their demands would be met within 2 month.

The deadline is reaching in few day while none of the workers demands have been met.