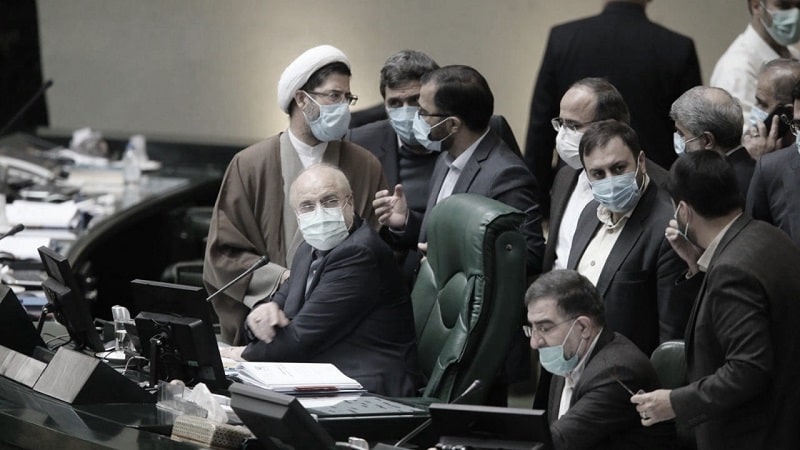 After a month of infighting and dispute between Hassan Rouhani’s government and Iran’s parliament over the budget bill, the Majlis (parliament) finally approved the government’s budget bill for the upcoming Persian calendar year. These infightings were over more share of wealth and plundering people.

There were two principal issues in dispute between the Majlis and Rouhani’s government over the budget bill. These issues were: 1- the sources of the regime’s income in next year’s budget and 2- the government-specified exchange rate of the U.S. dollar.

Rouhani’s government has considered selling 2.3 million barrels of oil as the base of the regime’s income for next year. Therefore, “over 50% of [the income sources] of the budget bill is related to oil, while its realization is not clear,” according to MP Allahverdi Dehghani, who spoke during parliament’s session on February 16.

Thus, in the previous session on February 2, Mohammad Bagher Nobakht, head of the Budget and Planning Organization, protested the Majlis’ objection to the budget bill and increasing oil revenue figures. “Don’t you read the secret reports? Don’t you know about oil income?” he said, adding that “[Majlis Speaker Mohammad Bagher] Ghalibaf knows that our multi-hundred-billion-dollar income has been reduced to a few hundred dollars.”

Ghalibaf immediately responded: “If you know that our oil exports are at a minimum, why have you planned to sell 2.3 million barrels of oil? How has the government scheduled its expenses based on the revenue that does not exist?”

Yet, without resolving the dispute or changing the income sources, the Majlis adopted the budget bill on February 16. The regime’s MPs seemingly forgot their own words about the sources of income and adopted the bill based on its “hollow dependence of dream of selling oil,” as described by MP Mohsen Dehnavai on December 6.

Therefore, government agencies and individuals, and organizations affiliated with the regime and its officials benefit from 42,000-rial dollars. They would then sell at the market rate and make huge profits, as discussed, many times in the regime’s state-run media.

“The government is digging its hands in the pocket of the middle and lower classes,” wrote state-run Resalat daily on February 10. Resalat had previously acknowledged on February 4 that “Since 2018, the profit generated from the 42,000-rial exchange rate is ten times larger than the entire yearly cash handouts being offered to the needy, and it has been deposited into the pockets of individuals who have access to this currency. The [regime’s affiliates who] had access to the 42,000-rial dollar were able to import their goods at this rate but sold it at free-market rates.”

The Majlis adopted the budget bill without removing or properly addressing this method of plundering people’s wealth, which is a sign of the regime’s institutionalized corruption.
So how was the bill adopted?

Nobakht on February 16 answered this question by admitting to the behind-the-curtain deal of both factions. “It was agreed that we preserve the 42,000-rial exchange rate in the first six months of the next year (March-August 2021),” he said.

Nobakht’s remarks elucidated that the real dispute between both factions was over more share of wealth and plundering people. Each side had aimed to use its levers of plundering and preparing the ground for their affiliates to make astronomical embezzlements.

Thus, the Majlis and the government agreed that they keep the 42,000-rial exchange rate, so the affiliates of Rouhani and his government profit from it until the end of his term. In return, the rival faction maintains their cash cows, such as the free trade zones they use to import luxury goods and sell them at astronomical prices.

Both factions also agreed on one other issue. That is people’s hatred toward the regime for decades of plundering, institutionalized corruption, and oppression. “Both faction, whatever they disagree with, agree that people are tired and frustrated with the current situation,” wrote the state-run Etemad daily on February 16.

And as Arman daily wrote on February 15, “All problems will open their mouths at one time, and on the day when the tolerance of the majority of the society, the workers, is over and their patience is exhausted, we will not see good results.”