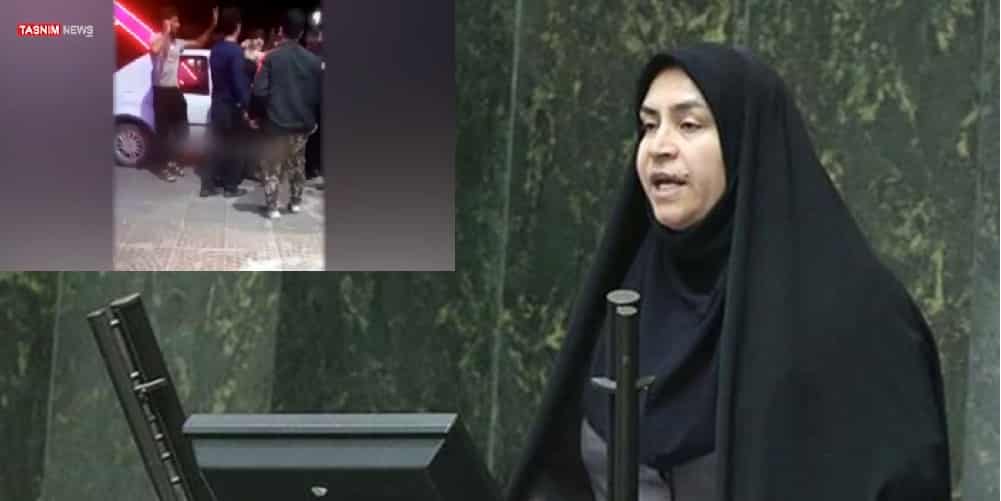 Recently, a video circulated online of an Iranian MP, Fatemeh Maghsoudlu, making a scene while authorities try to arrest her brother on corruption charges. Although the tip of an iceberg, this scandal once again shows the grim face of corruption in the mullahs’ regime.

From its military to parliament and its officials, one could hardly find an institution or individual free of corruption. In other words, it is safe to say that Iran’s ruling theocracy is corrupted to the core, and the ongoing revelation of embezzlement cases are testament to this fact.

Reports from Iran indicate that Hamidreza Maghsoudi, Fatemeh Maghsoudi’s brother, has been sentenced to five years in prison on embezzlement charges. The arrest of Maghsoudi’s brother was mocked by Iranians on social media, saying, “What happened to her anti-corruption claims.”

Maghsoodi, from Brojourd in western Iran, is a member of the so-called “revolutionary” parliament. These MPs were handpicked by the regime’s supreme leader Ali Khamenei in 2020 in a bid to close ranks in the fractured regime. They took office while making a lot of fanfare about “combating corruption” and “helping people.”

Of course, Iranians did not take this rhetoric seriously, as they overwhelmingly boycotted the sham parliamentary elections in February 2020.

But Maghsoudi’s case is not the first nor the last.

Hossain Mousavi, brother of Abolfazl Mousavi, ex-MP from Yazd, received 90 trillion rials of bribe in 2019. The MP himself was later arrested amid the regime’s infighting for receiving a 650 trillion rials bribe from Tehran’s municipality. It is worth noting that Mohammad Bagher Ghalibaf, the current Parliament speaker, was Tehran’s mayor at that time.

While the regime’s judiciary made a lot of fuss about arresting Mousavi, calling it an important measure “in combatting corruption,” they refused to say why they did not approach the head of the snake, Ghalibaf.

The recent trip of Ghalibaf’s family to Turkey to buy an expensive cargo of baby stuff caused a lot of stir even among the regime officials and state media.

“Can the families of state officials afford luxury?” the state-run Javan Online wrote on April 20. “Maybe they can, but for a person whose election campaign was merely focused on a rebellion against the 4% of capitalists, his wife and daughter cannot be the passengers on such a flight. If someone claims to be the pioneer and uses revolutionary slogans, he cannot buy the requirements of his unborn grandchild from markets in Istanbul.”

The regime’s rhetoric of having a simple life in Iran and buying domestic products reminds Marie Antoinette’s famous saying before the revolution. When told that her French subjects had no bread, Marie-Antoinette sniffed, “Qu’ils mangent de la brioche”— “Let them eat cake.”

“Can the families of state officials afford luxury?” the state-run Javan Online wrote on April 20. “Maybe they can, but for a person whose election campaign was merely focused on rebelling against the 4% capitalists, his wife and daughter cannot be the passengers on such a flight. If someone claims to be the pioneer and uses revolutionary slogans, he cannot buy the requirements of his unborn grandchild from shopping malls in Istanbul.”

But corruption is not limited to the regime’s MPs. Iran’s kleptocracy, its endemic nepotism, and countless high-profile embezzlement cases exceed one’s imagination.

The state-run Jahan-e Sanat daily mocked the regime’s nepotism in an article on January 17, saying,  “They come in buses and occupy high positions, and the only thing that does not matter is merit. One cannot find criteria such as related education and degrees, background, and experience. Instead, we are just told about their positions and managerial titles.”

Corruption is institutionalized in Iran’s ruling theocracy. Regime officials and their relatives enjoy luxurious lives, and their unborn babies receive expensive gifts. Meanwhile, many Iranians presell their infants to earn a meager living, or many mothers sell their hair to buy books and pens for their children. Iranian boys and girls should do street peddling or collect trash. The heart-wrenching video of a little boy that does not even know the meaning of “dream” scars the conscience of any human being.

Regardless of which faction they belong to, the regime’s officials remain deeply embroiled in various domestic corruption scandals, and the facts mentioned above are just the tip of the iceberg. Providing any concessions to Tehran or showering it with money cannot and will not revitalize Iran’s economy and help people. The root o Iran’s economic crunch lies in the regime’s corruption and its squandering of the nation’s resources on domestic suppression and external terrorism. The ongoing protests in Iran by people from all walks of life against the regime and its corrupt leaders demonstrate people’s genuine concern. As they have chanted during their protests, “One less embezzlement, and our problems will be resolved.”