How Much is a Baby Worth in Iran?

Walking down the streets of Tehran can be very heart-wrenching. Especially when you pass some of the alleys farther South from downtown, where advertisement about selling body organs is glued all over the place on the walls and you just can’t ignore the irony that people are literally giving up their health to buy food or other livelihoods to survive.

But the most disturbing ones are from parents who are trying to sell off their newborns. It’s just unimaginable what problems can drive you to the decision to give away a part of yourself to an unknown fate, just to keep above water and perhaps save the other ones… for a while.

Iran is not the country it ought to be. Stretching from Turkey and Iraq to Turkmenistan and Pakistan, it is the world’s 17th largest country in terms of territory, one of the world’s oldest continuous major civilizations, ranks fourth largest in terms of the world’s proven oil reserves, ranking second in the world and accounting for about 17% of the world’s total natural gas reserves, and its mineral reserves currently amount to 25.7 billion tons if officially discovered evidence is to be believed.

Everyone connected to the internet or anyone who has cared to read the news knows that Iran’s wealth is unfairly distributed and while more than 60% of the population lives under the official poverty line, a tiny 4% monopolizes the 14th richest country in the world and the wealthiest in the Middle East, according to Capgemini’s World Wealth Report.

As the founder of the clerical regime, the former Supreme Leader Ruhollah Khomeini branded himself as the leader and frontrunner of the global fight against American “Imperialism” and everything the Western culture stands for. Slogans of “Death to America” and “Death to England” has never ceased to be shouted during and after the Friday prayer sermons across Iran, even at the height of the Western appeasement era when the influx of commercial delegations rushed to the country to secure lucrative multibillion-dollar contracts.

But as hypocrisy is systemically institutionalized in the Iranian state philosophy, so is their enthusiasm for Western countries, particularly the United States of America, as the most cherished destiny to send their offspring to study, develop and thrive.

In 2017, when the son of the former Vice President Mohammad Reza Aref said on national TV he owes his glorious success in life to “good genes”, he stirred a firestorm among Iranians at home and abroad. The huge wealth gap in society became a hot topic in Persian social media and hashtags such as “good genes”, “where is your kid” or any outcast pronoun attached to the officials’ hypocrisy became a hidden trigger, ready to go viral on the spot.

Images of the Iranian regime’s relatives driving luxurious cars, sunbathing on private yachts, throwing lavish parties, and boasting about their aristocratic lifestyle made headlines. Rival factions at the highest levels of the regime’s hierarchy blamed each other and it even became one of the factors the Guardian Council used to disqualify the Supreme Leader’s senior advisor Ali Larijani from running as a presidential candidate in the 2020 elections.

In the latest incident, on April 19, pictures posted on social media showed Zahra Moshir, the wife of the Iranian regime’s parliament speaker Mohammad Bagher Qalibaf, and two other companions returning from Turkey, identified as his daughter, Maryam Qalibaf, and her husband, Mohammad Reza Bahiraei.

The trio had taken on Flight 4804 on Meraj Airlines and arrived in Tehran Airport from Istanbul with a large volume of cargo, including a hefty and expensive cargo of baby stuff. According to some sources, the substantial cargo that caused trouble with the Turkish airliner had driven the attention and triggered a stir. 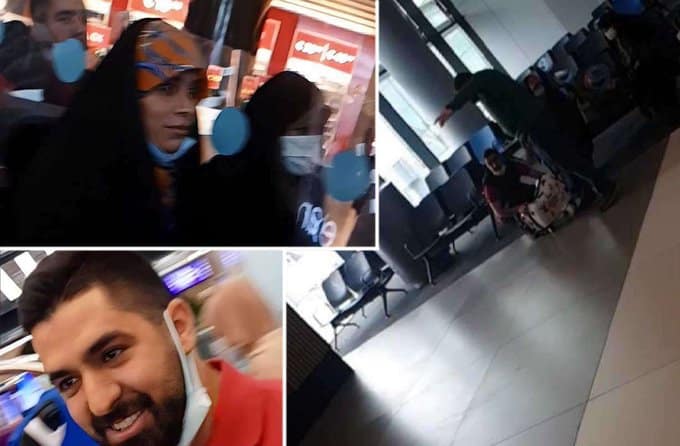 Soon the Persian language social media was flooded with curses and expressions of outrage towards the entire regime, whose officials have continued to call for refraining from consuming foreign products and prioritizing domestic production. Many used hashtags like “baby stuff-gate” or “knowledge-based Turkey,” mocking the  Supreme Leader’s slogan of the year “knowledge-based growth.”

Despite Qalibaf’s son and media advisor trying to insulate the parliament speaker from the controversy by claiming “he wasn’t aware” or “he was against the trip”, the damage was already done and criticism was all over the state media and some even called for his resignation.

In 2017, when Qalibaf was running against Hassan Rouhani in the presidential election, he claimed in the debates that he stood for 96 percent of the Iranian population versus 4 percent of the capitalists and embezzlers. He deliberately called out Rouhani’s minister of education for “importing clothes for his children from Italy.”

“Can the families of state officials afford luxury?” the state-run Javan Online wrote on April 20. “Maybe they can, but for a person whose election campaign was merely focused on a rebellion against the 4% of capitalists, his wife and daughter cannot be the passengers on such a flight. If someone claims to be the pioneer and uses revolutionary slogans, he cannot buy the requirements of his unborn grandchild from markets in Istanbul.”

Qalibaf and his family are no strangers to blunders and fiascos. While he was the mayor of Tehran, he was infamous for being the most corrupt among his peers, funneling 600 billion rials towards his wife’s charity, donating thousands of meters of land or organizing a multibillion rial wedding ceremony for his daughter in the Milad Tower and serving high carat gold-plated ice-creams to the elites who had been invited.

But despite the widely acknowledged fraud and corruption, the parliament’s speaker is among the very protected ones and among Supreme Leader’s confidants. He has a long record of serving Khamenei in critical conditions, i.e., getting Ebrahim Raisi’s cabinet approved quickly or handling the new controversial parliamentary bill that aims to restrict the Internet in the country.

Make no mistake, not all the streets of Tehran are the same. If you walk through Pasdaran Avenue, Farmanieh, and Sa’dabad, in northern Tehran, you feel like you’re walking on another planet. Multimillion-dollar villas and palaces, clean streets, and beautiful greenery only remind you that life has other colors too and that there are people who truly enjoy the true wealth of this country.

These images are used by Tehran’s mouthpieces in the West to convey the message that Iran isn’t as bad as some critics claim. Except for the sanctions of course.

Indeed, some elites in the good parts of Iran believe that natural evolution dictates that the “good genes” deserve to live and pass on their gifted genetic material to the next generation. Perhaps they think only their lives matter and their babies are worth surviving and thriving.

But if history is a guide, the evolution of humankind has been a slow but certain move from blind determinism to freedom and enlightenment. And perhaps that is the real reason for some state officials and outlets warning of the consequences of this extreme injustice and class difference.

Mocking the parliament speaker’s earlier rhetoric, the state-run Jahane Sanat wrote today: “Mr. Qalibaf, please have a look at the market prices, not the baby stuff and baby clothes prices. Look at the prices of bread, cheese, vegetables, tomatoes, eggplants, onions, and of course potatoes, meat, chicken, fish, and then you will learn how people are suffering. Concerning the actions of your family, doesn’t this increase the anger of the hungry, the poor, and the weak, and don’t you think it will awaken the destructive sense of discrimination in them?”

While desperately hoping this will solve the problem, the newspaper adds: “Mr. Qalibaf, with you as the speaker of the parliament, the national production will not be back on track. There is no trust in you. Please resign!!”