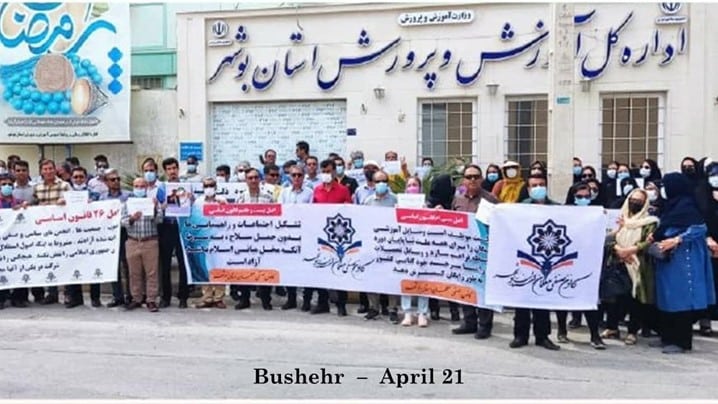 Protesters Chant: “This Is the Final Warning; Teachers’ Movement Is Ready for Uprising,” “Imprisoned Teachers Must Be Freed,” “Teachers Must Rise up to End Discrimination”

On Thursday, April 21, 2022, despite heavy security measures, thousands of teachers and educators in Tehran and in at least 51 other cities in 24 provinces rallied in protest against the difficult living conditions, meager salaries, the lack of response to their demands, and non-implementation of equalization of pensions. Carrying photos of imprisoned teachers, they condemned the continuous and systematic repression and detention of protesting teachers and union activists.

Since this morning, the State Security Force (SSF), turned out in force, trying to prevent the formation of rallies and block people from joining them. The repressive forces arrested a large number of teachers in Tehran and other cities. The demonstrators chanted: “Raisi, Qalibaf (Speaker of the regime’s parliament), this is the final warning, the teachers’ movement is ready for the uprising,” “Imprisoned teachers must be freed,” “Teachers are vigilant and outraged against discrimination,” “Teachers rise up to eliminate discrimination,” “Shame on the incompetent Education Minister.”

In today’s rallies, teachers called the regime’s Education Ministry “a place for plotting and codifying laws against teachers and education ” and called for “a halt to the policy of privatization and monetization of education,” which results in an “increase in child labor, and spreads social harms.” The protesters also called for the “unconditional release of all imprisoned teachers,” the “abolition of harsh prison sentences against union activists,” and an “end to all cases of summoning the protesting teachers.” They reiterated, “We will not leave the streets until our demands are met. Repression and incarceration and fabricating charges against protesting teachers will not work in stymying the teachers’ movement, even for one step.”

Mrs. Maryam Rajavi, the President-elect of the National Council of Resistance of Iran (NCRI), saluted the protesting teachers and educators and said: The honorable and deprived teachers of our country reflect the anger and outage of 80 million Iranians who are suffering from the oppression and plunder of the inhuman clerical regime. She added: Most of the teachers and other working sectors live below the poverty line, while the embezzlements by the mullahs, IRGC leaders, and their children are skyrocketing. The answer is to overthrow this plundering regime and establish democracy and people’s sovereignty in Iran.

Pictures of rallies in several cities are below. 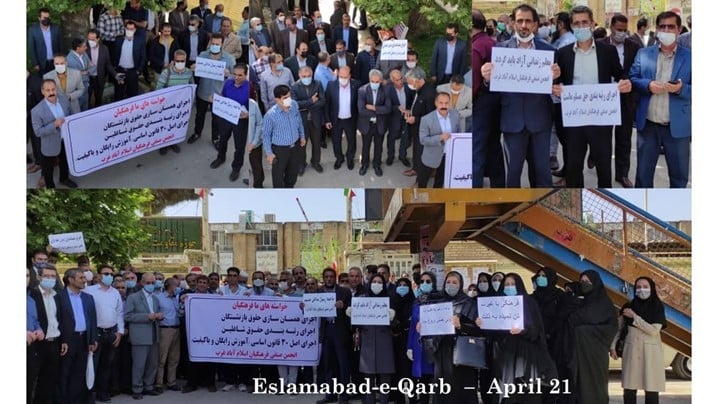 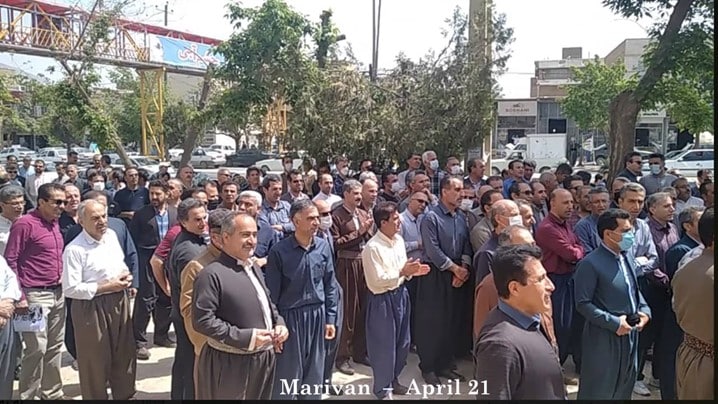 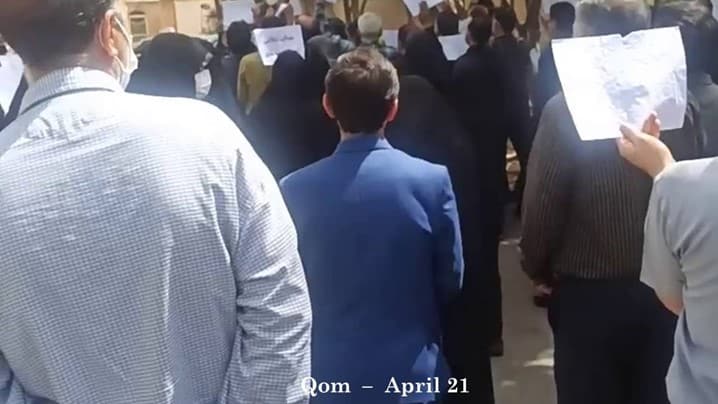 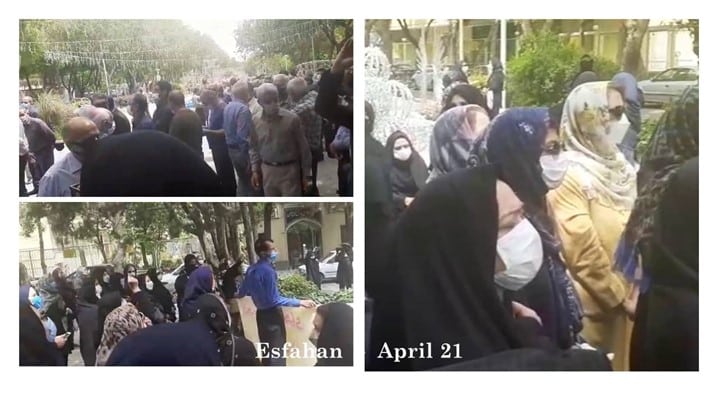 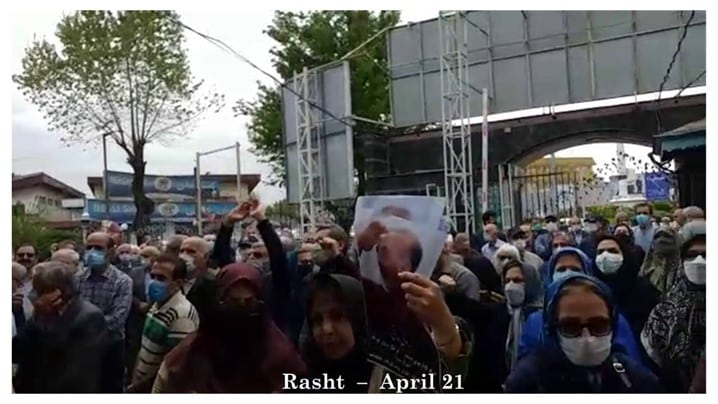 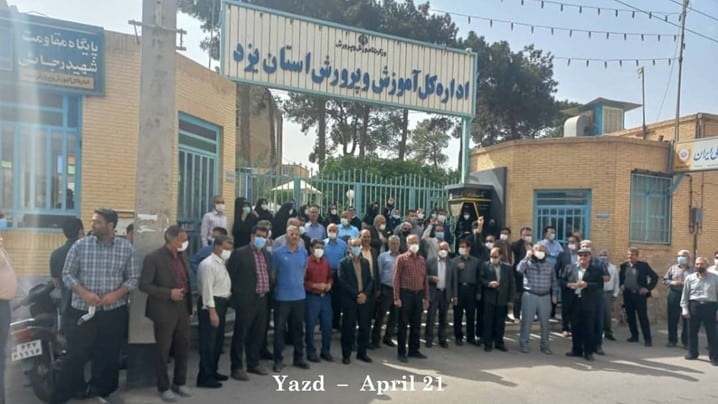 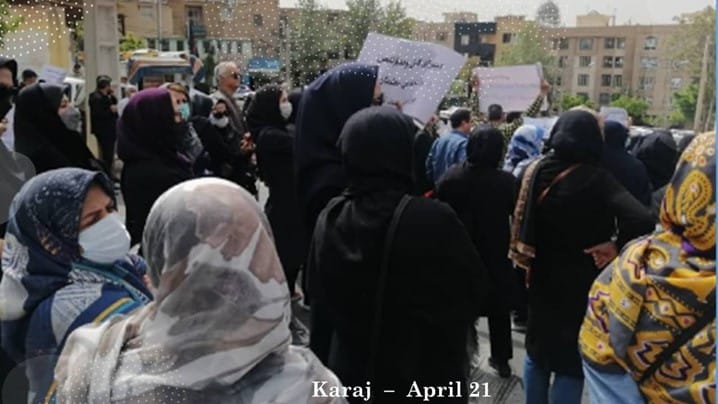 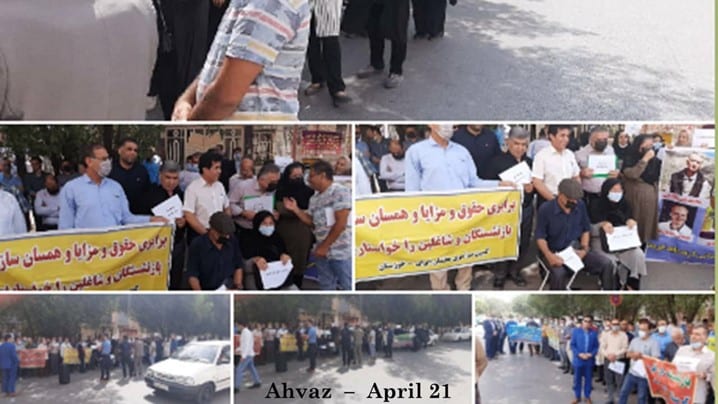 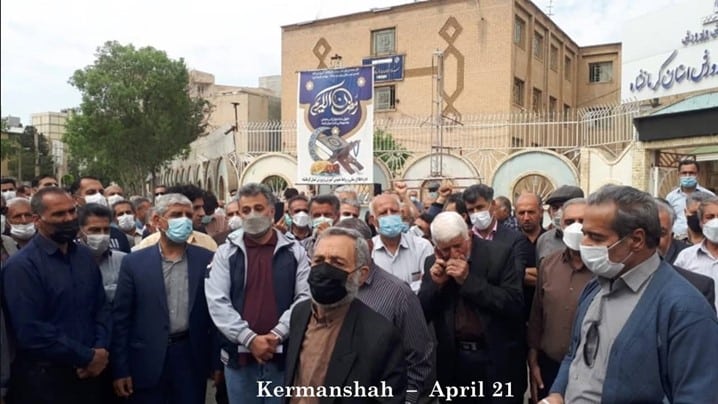 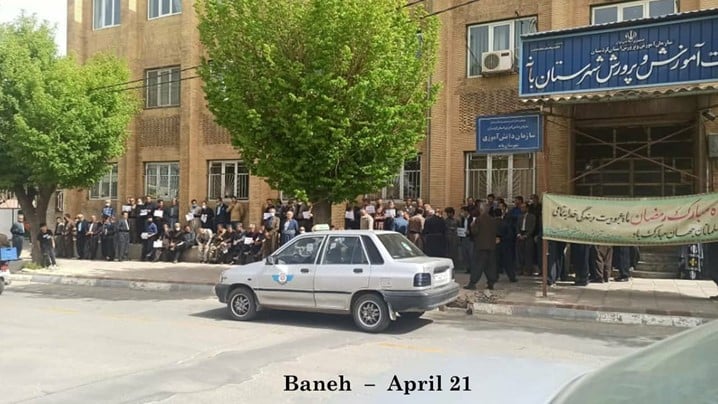 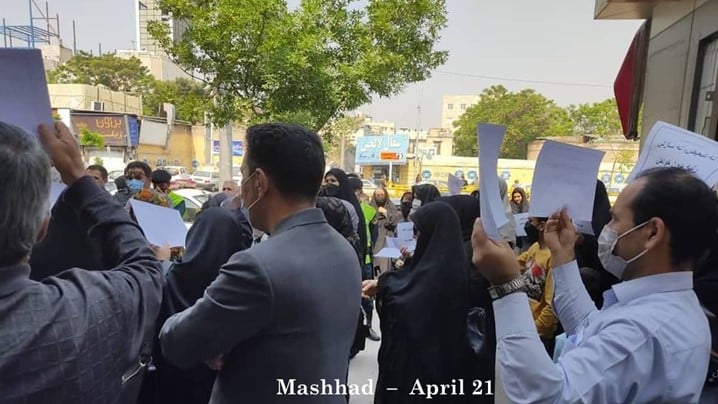 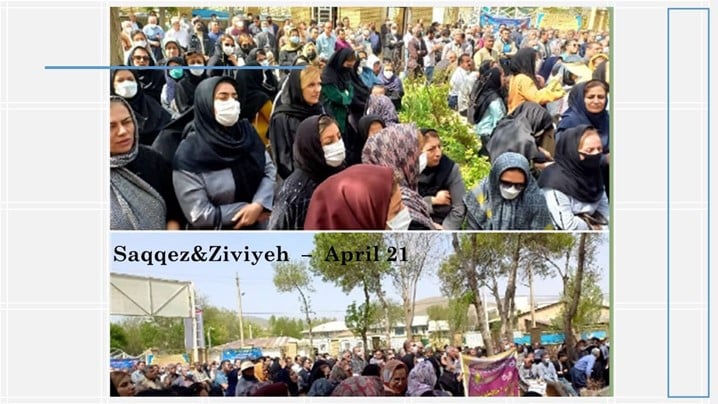 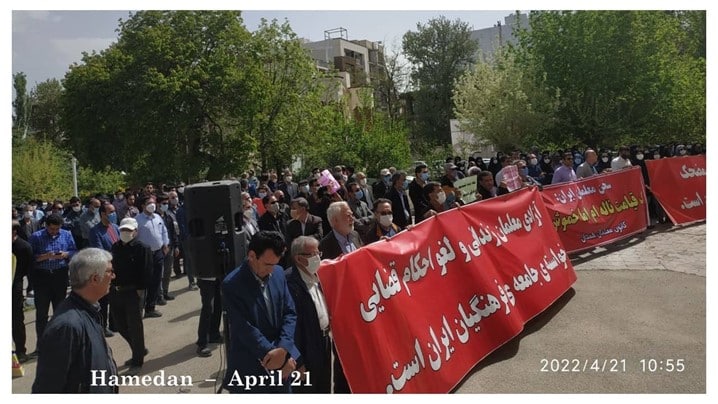 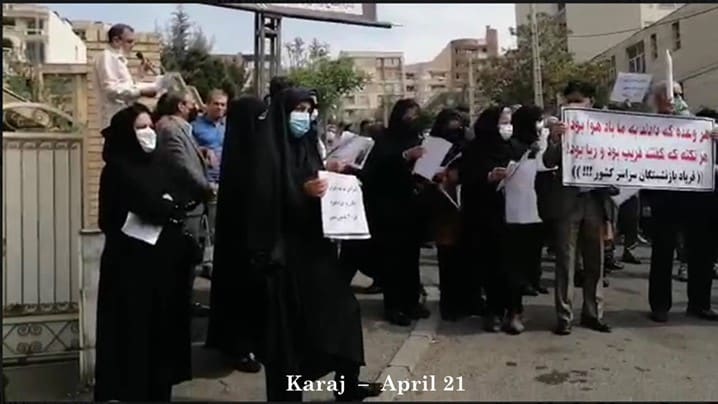 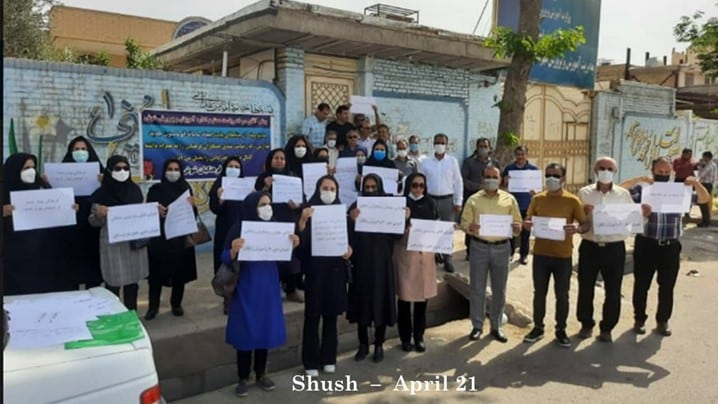 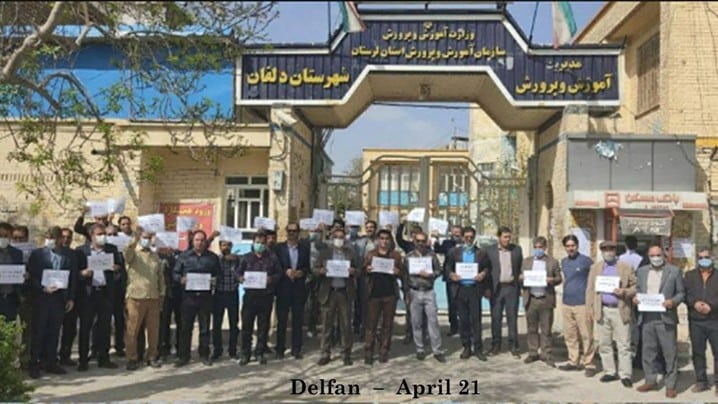 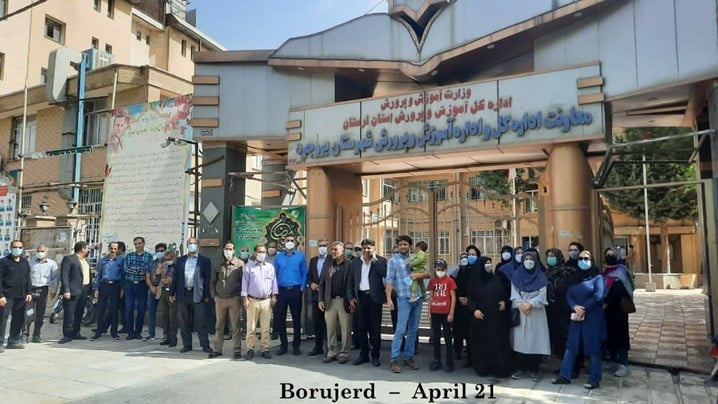 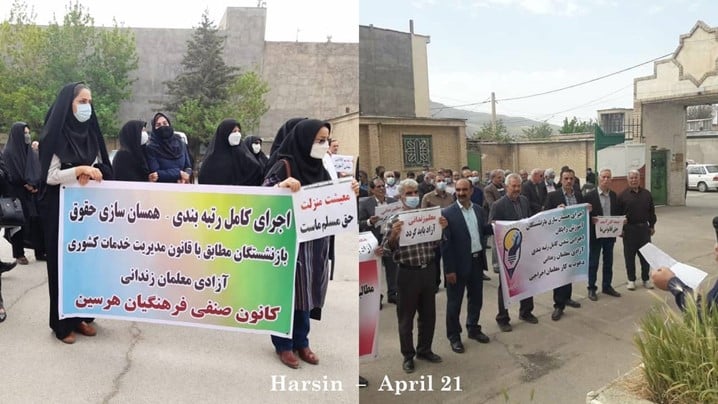 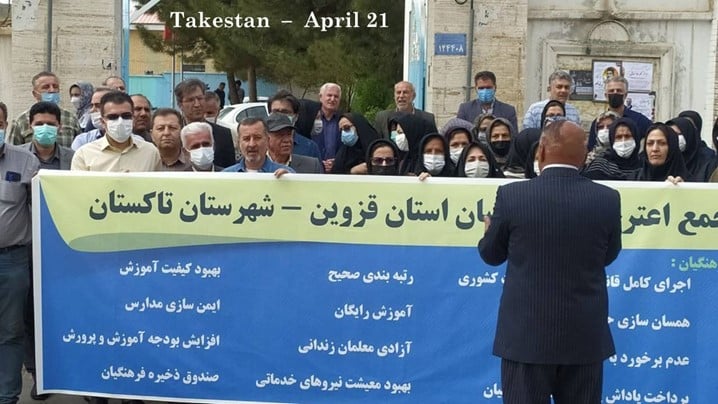 Previous articleHow Much is a Baby Worth in Iran?
Next articleIran – Activities of Resistance Units in Eight Cities