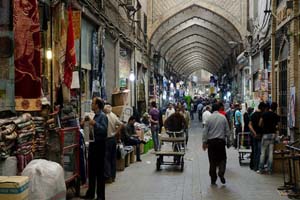 NCRI – While the downward trend in oil prices on the world markets continues, experts unanimously say that this will aggravate the economic crisis in Iran. The main consequences of this crisis are: rising inflation rising, unemployment and weakening of the Iranian rial.

Last year, the price of crude oil on world markets exceeded $100 a barrel. Oil prices began to drop last summer, and since the beginning of January this year it fell below the level of 50 dollars per barrel.The government Hassan Rouhani planned the budget for the next Iranian year (March 2015-March 2016) which is based on a forecast of oil prices of 72 dollars a barrel.

According to official figures, one third of Iran’s economy is dependent on oil. Moreover, according to experts, more than two-thirds of foreign exchange earnings come from Iranian oil exports.

Experts say that with the decline in oil revenues, the government oblige Rouhani to significantly reduce next year’s budget. This will aggravate the economic crisis in Iran with the following consequences: the recession will intensify, imports will decline and the activities of production units across the country will slow down.

Another important consequence of this crisis is that the value of the Iranian rial against the dollar will decline. In recent weeks, the free exchange market in Tehran, the dollar traded against 35,000 rials.

The main reason for the continuation of the economic crisis in Iran is that the clerical regime spends a considerable portion of the country’s income supporting the Syrian regime and supporting the Lebanese Hezbollah and Shiite paramilitary groups controlled by Iran and assets in Iraq.
According to a recent report, the Iranian regime spends, every month between 1 and 2 billion dollars supporting the dictatorship of Bashar Assad in Syria.