Iran Exporters Closed out of Qatar Market Due to Sanctions 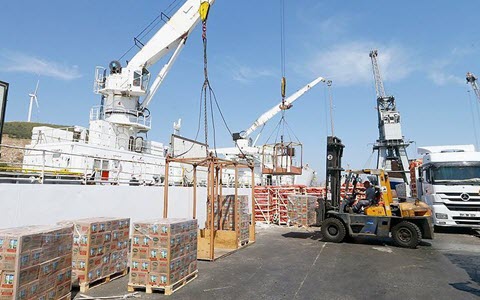 NCRI – Iranian businessmen complain that they’re not being supported by their government the way they should. They point to Qatar market, which due to different reasons has closed out Iranian goods and is now out of Iranian traders’ reach.

Oil and its derivatives account for more than 90 percent of Iranian regime’s exports. In the meantime, private sector exports, including food products, are not supported by the government as it fails to adequately invest on creating necessary infrastructures. This has led to losing neighboring markets in the region, particularly in competing with such rivals as Turkey which is acting quite strongly in this regard.

One of such neighboring markets is Qatar, which could be a huge opportunity for Iranian exporters, particularly following Saudi sanctions against the country and the subsequent fears for shortage of essential items. But it turned out to be quite the opposite, with Iranian traders being practically closed out of the Qatar market.

“Turkey’s strong entry into Qatar market in addition to low quality of Iranian goods compared to their Turkish counterparts, lack of infrastructure in the country, in Fars province in particular, and government’s failure to provide exporters with necessary incentives are among the factors that have caused Fars exports to Qatar to drop to its lowest level”, says Sohrab Sharafi, board member of Fars province’s Industry, Mining, and Trade House, in an interview with ‘Khabar-Jonoub’ newspaper.

According to Sharafi, following Saudi sanctions against Qatar, Iranian exporters were able to have a strong presence in the country’s market, so that Iran’s daily food exports to Qatar were between 90 to 120 tons at the time.

“Fars province’s export to Qatar was nearly 120 thousand dollars a day until a few weeks ago, but it has now reached to its lowest level”, says Sharafi, adding “export to Qatar is now only possible through passengers’ luggage and suitcases.” Now, however, Iranian exporters have been kicked out of Qatar market while it’s been fully given to Turks to enjoy from.

Also state-run ISNA news agency has quoted Hadi Hanani-Jahromi, member of Shiraz chamber of commerce, as saying “prior to international sanctions, Qatar had good diplomatic and trade relations with Iran. Saudi sanctions against Qatar created a good opportunity for Iranian businessmen to raise their presence in the country, but no efforts were made to make good use of it.”

Among the obstacles for Iranian businessmen is the problem with land and sea transport to Qatar.

One of such problems, for instance, is that private sectors cannot afford obtaining refrigerated containers, what has prevented the exports to thrive.

Meanwhile, Board Chairman of Export Association ‘Ebrahim Jamili’ has said in his interview with state-run ILNA news agency “due to lack of economic diplomacy, we couldn’t have an active presence in Qatar market, so much so that none of our association members, who are among the country’s top-rated exporters, succeeded to obtain their Qatar visa. How could we have presence in Qatar market under such conditions?”

Jamili, too, points to lack of necessary facilities and government’s failure to adequately support private exporters, saying “Dubai market is one of our oldest export markets. Meanwhile, you could count on the fingers of two hands the number of our refrigerated ships. Since private sector cannot afford such ships, the government has to come forward and provide the infrastructures.”

“Government’s intervention in economy brings about nothing but loss, so the private sector should be put in charge as much as possible”, says Jamili, recommending that “the government should only be responsible for legislating and enforcing the law, and not for intervening in the least significant issues.”

This is despite the fact that major part of Iran’s economy is in the hands of state, pseudo-state, and military businesses and entities, with private sector having to make do with the least share of such huge economic opportunities.