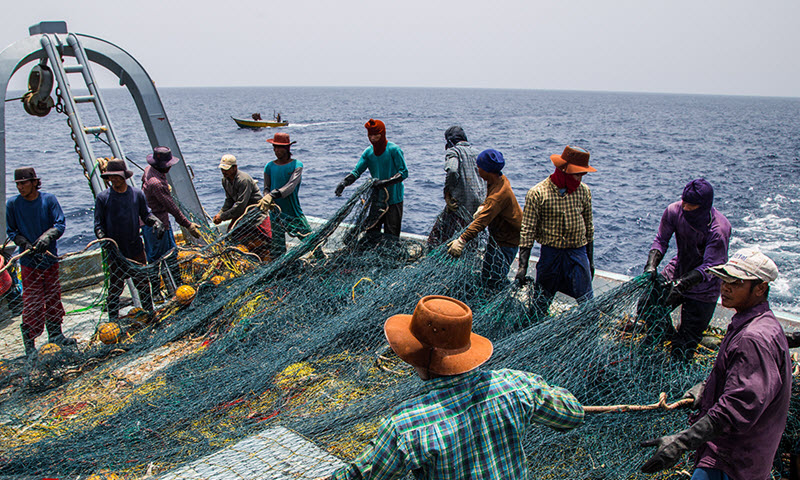 Fishermen in southern Iran have repeatedly protested the licenses being issued to Chinese fishing boats engaged in deep-sea trawling. However, the relevant government authorities have failed to respond to the fishermen’s grievances, although the scandal became public about two years ago.

More than 5,000 Chinese industrial trawlers have been allowed to fish in Iran’s most plentiful waters by the Iranian Fisheries Organization. According to the native fishermen, the industrial fishing practices of Chinese boats leave little behind— fish eggs and shellfish get caught up in the Chinese trawlers.

Even the Revolutionary Guards Corps have complained that Chinese trawlers are illegally draining Iranian waters in the Gulf of Oman and the Persian Gulf. When Major General Mohammad Ali Jafari, Commander-in-Chief of the Revolutionary Guards, saw that the boats of local fisherman had been left idle and turned upside-down outside of the water, he wept.

Officials of the Islamic Republic claim that while the boats are Chinese, they are leased by Iranian fishing companies, and although there are some Chinese nationals working on the trawlers, they are certainly not all Chinese fishermen.

Still, representatives to the Iranian parliament have discussed the Chinese trawlers. Member of parliament from Minab in Hormozgan province, Mostafa Zolghadr said, “Local people say that Chinese ships are there on the sea but the Fisheries Organization says that it is not so. We do not know what to do.” Ahmad Moradi, a representative from the port city of Bandar Abbas, says, “I have no doubt that behind the story of the Chinese ships stands a powerful cabal that is not easy to deal with.”

China has officially announced that its fishermen were making more than seven billion dollars from their operations in the area, but after the Rouhani administration and the Revolutionary Guards entered into a dispute over the issue, China denied that it had any fishing fleet in Iranian waters.

Iran Fisheries Organization grants permits to fish in Iranian waters. The head of the agency said it did not have a contract with China or any other country in 2018, and that the organization had only issued permits to Iranian companies.

The Ports and Maritime Organization contradicted these assertions. In 2018, its vice president said, “the Chinese have a long-term contract with the Fisheries Organization to fish in the Gulf of Oman and the Persian Gulf.”

On February 11th, the Revolutionary Guards announced that it had impounded 14 trawlers. Five were reported to be Chinese and nine Iranian. The Guards’ commander who announced the news said the case would be heard before a court and prosecutions would follow.

It is legal for foreign vessels to fish within the “special commercial marine zone” provided Iran has granted them permits to do so.

The Revolutionary Guards’ Navy is responsible for protecting maritime areas in the Gulf of Oman and the Persian Gulf. A detained vessel is taken to a port, and the vessel’s crew are also usually taken into custody. If the court rules that the vessel is at fault, it might impose a fine and, in more serious cases, it might rule that the government can confiscate it. What Islamic Republic and Revolutionary Guards officials have stated is that they have detained foreign vessels that do have contracts with the government of Iran without the government issuing complaints that these vessels have engaged in illegal activities.

It seems that the government cannot — or does not want — to present legal evidence to prove that they have been doing what they were allowed to according to their contracts. It appears to reveal financial corruption and unlawful conduct at play.

Inept bureaucracy and corruption affects the economy, and has a disastrous impact on the lives of people who are just trying to support their families.