Iran on the verge of severe financial crisis .. intelligence report 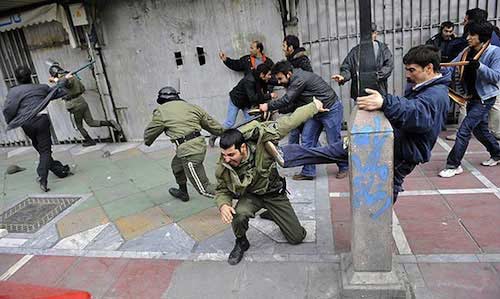 Iranian protests during the country’s 2009 pro-democracy demonstrations. A purported Iranian intelligence report that has been leaked online warns of an imminent financial crisis in the country that would cause nation-wide upheaval. (Reuters)

By Alaa al-Menshawi-Al Arabiya Dubai :
An apparent classified Iranian intelligence report that has been leaked online warns of an imminent financial crisis in the country that would cause nation-wide upheaval.

Excerpts of the report, posted this week on several Iranian websites, revealed that the government might not be able to pay the full salaries of its employees in the coming three months, which threatens the eruption of massive popular protests across the country.

Large portions of the population might suffer from starvation, the report said, adding that riots are expected to take place in border cities where living conditions are rapidly deteriorating.

According to the report, Iran’s reserve of foreign currency might run out within the coming six month owing to extreme budget deficiency.
Other official reports have stated that Iranian factories are working on only half their capacity, and that a large number of them have declared bankruptcy.

Under international sanctions, inflation in the country has reached 33 percent and prices of meat, chicken, and milk saw an unprecedented hike that reached 80 percent last year.

The European embargo on the purchase of Iranian oil is costing the country an estimated $133 million in daily revenues, and the Iranian riyal has also witnessed an unprecedented drop.

The governor of the Iranian Central Bank, Mahmoud Bahmani, has announced a raising the official rate of the riyal against the dollar over the next 10 days in order to deal with the “international developments.”

But according to Iranian bankers, the official rate – 12,260 riyals to the dollar — was only a reference. There was a wide gap between the official and actual rates, which reportedly increased the prevalence of corruption within the Iranian government, since purchasing dollars with the official rates has become extremely profitable.

Previous articleBomb explodes outside Damascus mosque, 5 killed
Next articleMrs. Rajavi welcomed the closure of Canadian Embassy in Tehran and expulsion of Iranian diplomats in Canada