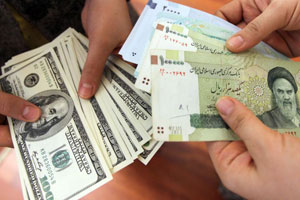 At least $1 billion in cash has been smuggled into Iran as it seeks to skirt international sanctions imposed for Tehran’s illegal nuclear activities.

The sanctions have shut Tehran out of the global banking system, making it hard to obtain the U.S. dollars it needs for international transactions.

According to Reuters the money has been illegally smuggled into Iran via a range of front companies with nearly half of these funds channeled through Iraq.

Interviews by Reuters with Iranian officials and Western diplomatic and intelligence sources show a bigger smuggling effort by Tehran, as well as the routes and methods used — details not previously reported.

These sources said at least $1 billion in U.S. bank notes had been smuggled into Iran in recent months, with the Iranian central bank playing an important role.

Three Western diplomatic sources and three Iranian government officials, who all declined to be identified citing the sensitivity of the issue, said Tehran had been working on easy ways to obtain dollars since March last year.

The sources said the cash was hand-carried by couriers on flights from Dubai or Turkey, or brought across the Iraq-Iran border.

Before it reached Iran, the cash was passed through money changers and front companies in Dubai, in the United Arab Emirates, and Iraq, they added.

A Western diplomat who follows Iranian affairs said the central bank was a driving force in efforts to obtain dollars.