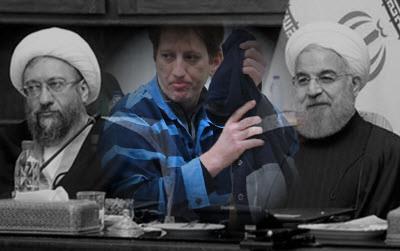 NCRI – Hassan Rouhani’s government has conflicted with the Judiciary of Iran on a case of robbery to an amount of 3 billion dollars. The conflict has arisen at the peak of public hatred regarding social disasters. The plunders and loots done by the Iranian regime are disclosed more than ever.

The first Deputy of the Judiciary accused the government of cheating. He requested that the financial resources of Rouhani’s campaign in the last presidential election have to be announced.

On Wednesday of December 4th 2016, the first Deputy and the Spokesman of the Judiciary, Gholam-Hossein Mohseni-Eje’I in a meeting stressed that the bank accounts of the Judiciary are completely transparent. As Hassan Rouhani has twitted yesterday that the government is ready to set up a system to reveal all income and expenditures, Eje’I responded:”Well, why not? Nobody has stopped you.”

Gholam-Hossein Mohseni Eje’I also addressed Akbar Torkan who was the Deputy Campaign Manager of Hassan Rouhani in 2013, saying that he should unconditionally release the sources of the campaign.

Akbar Torkan had earlier stated that Rouhani’s campaign will release the accounts information provided that all candidates also announce that whom they have received money from in the presidential election of 2013.

The spokesman of the Judiciary said:”I ask you how much does a person require for a presidential campaign? Certainly more than 20 billion Tomans. Well, you tell, where did this money come from?”

The conflict between two branches of the regime started when Hassan Rouhani announced in the last week that the Judiciary has prevented to deliver Babak Zanjani to the Ministry of Intelligence and it has not yet been ascertained who his accomplices were and why they are in such positions now.

The head of the Judiciary of the Regime, Sadegh Larijani on 3rd of January 2017 retorted to Rouhani that Babak Zanjani has donated to Rouhani’s campaign in the presidential election of 2013, as he claims.

Sadegh Larijani reiterated that:”we do not have anything to say now. We can summon those who are alleged by Babak Zanjani and if needed we will apprehend them to figure out the case.”

One day after that, Hassan Rouhani twitted that he is ready to establish a system to provide clarification about the government’s accounts. Meanwhile, he asked the Judiciary to release its accounts information as well.

The two MPs have asked Sadegh Larijani to clarify about the amount of deposit which has been transferred from the Judiciary to his personal bank account.

The Senior Advisor of Hassan Rouhani, Akbar Torkan (who was also his Deputy Campaign at the time of presidential election) in an interview with Jamaran Website claimed that Babak Zanjani has never donated to Rouhani’s campaign and this is a blatant lie.

In the midst of this conflict, the Spokesman of the Guardian Council implicitly threatened Rouhani that he will be disqualified for the next presidential election.

Abbas Ali Kadkhodaei contended that the Guardian Council has always assessed the eligibility of presidents closely and there is no guarantee that a president would be qualified for the second presidential election.

Previous articleRussia Pledges to Expel Militias From Syria and Slam Stubborn Heads Into the Ground
Next articleIran: How Trump can help the conflict in Syria