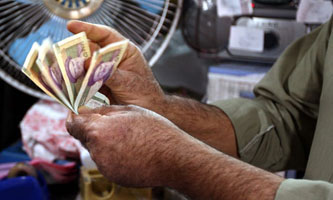 NCRI – The Iranian regime’s Central Bank has predicted that the inflation rate by the end Iranian New Year on March 20 would hit 32 percent, the state-run news agency Mehr reported on Friday.  This is while according to independent economists, the true inflation rate is over 100 percent.

The French economic daily Les Echo reported on February 5 that according to a classified report by the Majlis Research Center of the Iranian regime’s Parliament the inflation rate has reached to 88 percent in the past 12 months.
Steve H. Hanke, a Johns Hopkins University economics professor and senior fellow at the Cato Institute, Washington research group, who has been following Iran’s economy, said in a report that that the official inflation rate reflected what he called the Central Bank’s “habit of failing to release useful economic data, and what it does release often has what I would describe as an ‘Alice in Wonderland’ quality.”
“Ever since hyperinflation briefly reared its head, back in October, the Iranian government has tried to prop up its faltering currency and stop its economy’s death spiral through force and deception,”  Mr. Hanke wrote in an article titled “Iran’s Lying Inflation Statistics,” published in Cato Institute website.

According to the calculation that was done by using objective, market-based data Mr. Hanks believes the true rate of inflation is a whopping four times higher than the official reported rate.

Iran: What is the true inflation rate?