Raisi To Eradicate Poverty in Two Weeks in Iran! But How? 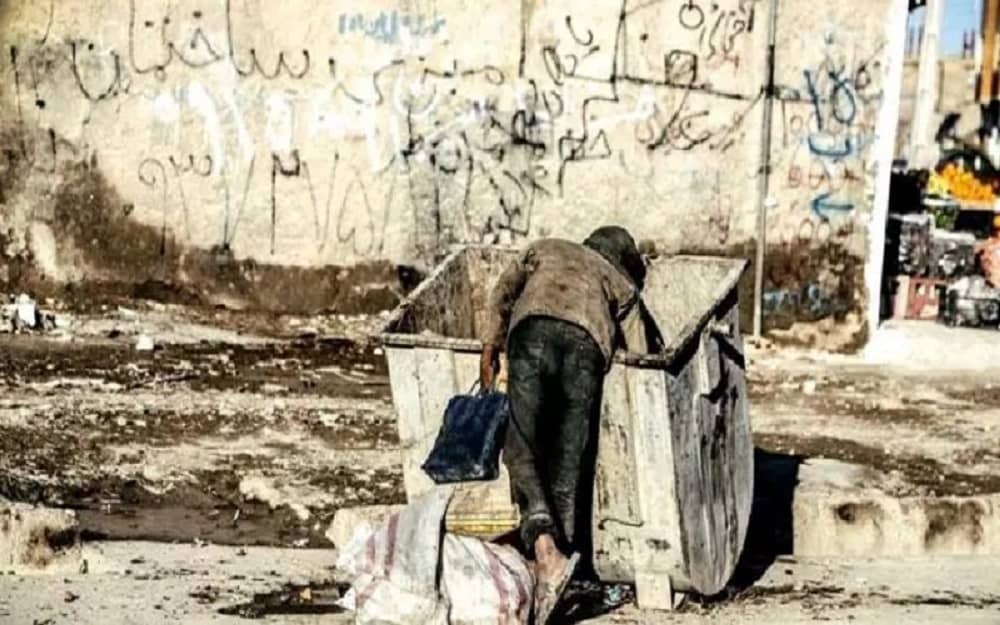 From selling body parts to searching trash cans for food, social media in Iran are filled with heart-wrenching videos of people who are trying desperately to make a meager living.

Instead of providing a real solution for Iran’s economic crunch, the regime’s president Ebrahim Raisi brazenly ordered the eradication of poverty!

“We expect the governors to use all possible capacities to eradicate poverty before we reach the [Persian New Year] of 1401,” he said according to Iran’s state media. Since becoming the regime’s president in June 2021 with tantalizing promises of revitalizing the battered Iranian economy, Raisi has continued his speech therapy and rhetoric.  A video clip circulated on social media some while ago showing Raisi asking a man, who is speaking of his financial difficulties, whether he had lunch or not!

What else could be expected of the man who has the blood of 30,000 political prisoners massacred in 1988 on his hands and someone who has no scruples?

“Such unprofessional statements by the president have social consequences. Sociologists believe that uttering such slogans discourages people more than ever,” the state-run Jahan-e Sanat daily wrote about Raisi’s new claims of combating corruption on March 7.

“According to social pathologists, if the government is trying to solve the problem of poverty in society, it must first hear the voices of protesters from different walks of life who gather in front of the Ministry of Labor every day due to low incomes and poverty,” the paper adds.

“At least one-third of Iran’s population lives in absolute poverty, so the economic situation must first grow to eradicate absolute poverty. At times, however, the authorities try to maintain class divisions. That’s why I think it’s a little worrying for the public to hear such slogans,” Amir Mahmoud Harirchi, a pathologist, told Jahan-e Sanat.

“When it is said that poverty will be eradicated within two weeks, it indicates authorities’ ineptitude to solve such major problems. In my opinion, Raisi does not have a clear understanding of the level of absolute poverty in the public,” Harirchi said, adding that people feel “abandoned these days, they have no hope of improving their living conditions. However, by speaking such words, the feeling of abandonment in people is strengthened. The authorities live in the best possible conditions and, in fact, do not know absolute poverty.

Harirchi said that Raisi thinks by giving hollow promises, “he could restore the lost public trust,” but “how on earth we could eradicate poverty in two weeks?”

The ongoing protests in Iran by people from all walks of life who call out Raisi and his hollow promises of economic reform and combatting corruption are testament to society’s explosive state.

Raisi gives hollow promises of exterminating poverty without proposing any robust and rigorous plan. Meanwhile, people are entering the Persian New Year of 1401 and finishing the last days of a “lost decade,” according to the state-run Donyaye Eghtesad daily on March 6. “This decade, due to the high inflation and unemployment rate, lack of investment and progress is considered to be a lost decade.”

Iranians are mired in abject poverty but believing that Raisi, despite his promises, is willing to address their problems is a false notion. The Iranian regime’s supreme leader, Ali Khamenei, appointed the “hanging judge” as his regime’s president to intimidate the public and show his teeth to people who explicitly demand regime change. The regime will not and cannot address Iran’s problems, as it is hell-bent on acquiring a nuclear bomb and needs every penny for developing a nuclear bomb and fueling its proxy wars.

“Until the current way of governing changes, the [regime] will not find peace and stability. We will be entangled in crises until the authorities notice this point. The biggest loser in this way is the government itself, which is experiencing a dangerous situation,” Farasham Momeni, an economist, warned regime officials in his interview with the state-run Arman-e Meli newspaper on March 5.