Written by The Editorial Board
18th December 2019 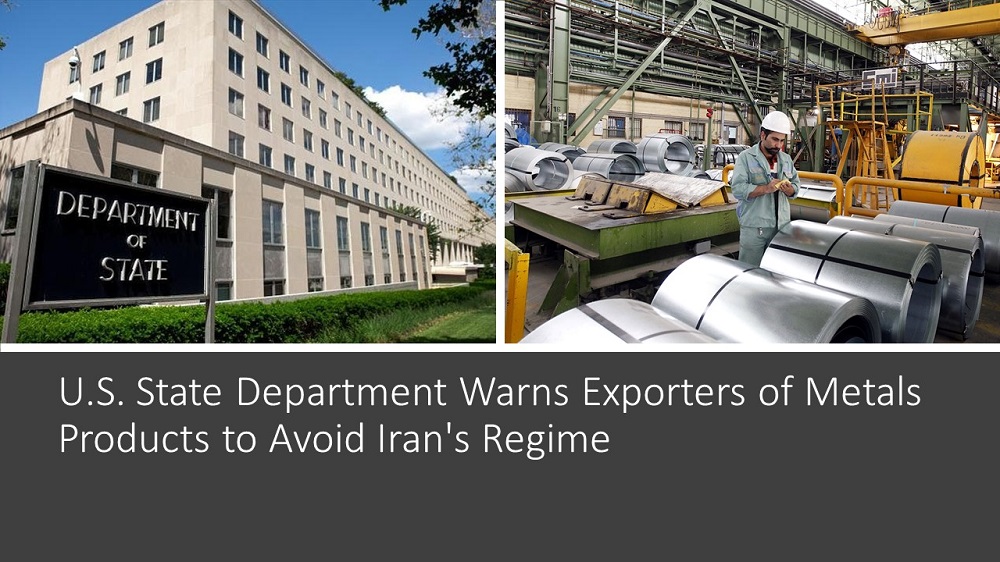 The United States Department of State has published an advisory to alert persons globally to the U.S. sanctions risks for parties involved in transfers or exports to Iran of graphite electrodes and needle coke, which are essential materials for the Iranian regime’s steel industry.

“The U.S. Government is taking strong action to deny the Government of Iran revenue derived from Iran’s steel sector, since such funds may be used to advance the Iranian regime’s malign behavior, including its proliferation programs, campaigns of regional aggression, and support for terrorist groups,” Activists | @HouseForeign @SenateGOP @FDD @FDD_Iran @Iran_Policy @PublicAffairsUB @Ubaltmain @Univ_System_MD

p>Transfers or exports to Iran of graphite electrodes or needle coke create significant sanctions risk for entities and individuals, including but not limited to producers and exporters of graphite electrodes and needle coke, port operators, shippers, shipping companies, and vessel operators and owners.  Sanctions risks may be present even if the intended end-user is not in Iran’s steel sector, the State Department said.

Several U.S. government sanctions authorities may apply to such transfers or exports, and those who engage in such transfers are at risk regardless of their nationality or location.  The consequences of being designated related to such transfers or exports are substantial, including potential blocking sanctions.  Businesses should be aware of the risks created from transferring or exporting needle coke and graphite electrodes to Iran and implement effective due diligence policies, procedures, and internal controls to ensure compliance with applicable legal requirements.

Graphite electrodes are mainly used in electric steelmaking, due to their high levels of electrical conductivity and ability to withstand high temperatures.  Electric steelmaking uses electric arc furnaces to create steel by melting down other recycled steel products.  Graphite electrodes are the main heating element during this process.  After this process is complete, the molten steel is poured into ladles and cast into new steel products.

Executive Order 13871 (Imposing Sanctions with Respect to the Iron, Steel, Aluminum, and Copper Sectors of Iran):  E.O. 13871 authorizes the blocking of property of any person determined by the Secretary of the Treasury, in consultation with the Secretary of State, to have knowingly engaged in a significant transaction for the sale, supply, or transfer to Iran of significant goods or services used in connection with the iron, steel, aluminum, or copper sectors of Iran’s regime.  Such goods or services could include exports of graphite electrodes or needle coke.

The Iran Freedom and Counter-Proliferation Act of 2012 (IFCA):  IFCA Section 1245(a)(1) requires the Secretary of State to impose 5 or more of the sanctions described in section 6(a) of the Iran Sanctions Act of 1996 with respect to a person (individual or entity) if the Secretary of State determines that the person knowingly sells, supplies, or transfers graphite, directly or indirectly, to or from Iran if the graphite (1) is to be used in connection with the energy, shipping, or shipbuilding sectors of Iran or any sector of the economy of Iran determined to be controlled directly or indirectly by Iran’s Revolutionary Guard Corps (IRGC); or (2) is sold, supplied, or transferred to or from an Iranian person included on the list of specially designated nationals and blocked persons maintained by the Office of Foreign Assets Control of the Department of the Treasury.  Of note, the sanctions menu described in section 6(a) of the Iran Sanctions Act of 1996 includes blocking sanctions.

Message to Iranians’ rally in London– July 27, 2019:
We urge Britain, Europe & all states to stop accommodating the mullahs. Do not help them scale down the sanctions. Stand up to them. Place the IRGC, the MOIS, Khamenei’s office,Hassan Rouhani [& Javad Zarif] on the terror list