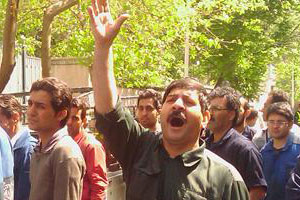 NCRI – Recent reports from Iran indicates increase in protests by workers. According to the reports, these protests primarily occurred in various parts of Iran between August 10 and 12.

In the port city of Mahshahr in southwestern Iran, contract workers staged a strike on August 11. They have demanded to receive the same benefits that permanent workers enjoy.

In Marvdasht, in the southern province of Fars, workers of an Azmayesh industrial factory gathered in front of the governor’s office. They demanded their wages that have not been paid in past 14 months.

In Bandar Abbas, capital of the southern Hormozgan province, youths clashed with security forces on August 10 to prevent the arrest of a baker.

In Rafsanjan, southeastern city of Iran, workers of a cement factory have staged a sit-in protest. This sit-in has entered its twentieth day on August 12. Workers demanded that  dismissed workers to be returned.

In Qorveh in the western Iranian province of Kurdistan, dismissed workers of a steel plant demonstrated on August 11. They demanded  their unpaid wages.