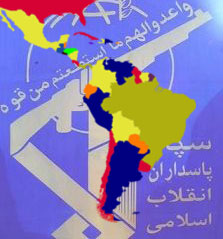 NCRI – On December 28th, 2012 Barak Obama enacted the “Countering Iran in the Western Hemisphere” Act. The growing presence of Quds Force (Qods Force) under the guise of religious entities in Latin America is a focal point in the new law.

The Quds Force, a component of the Islamic Revolutionary Guards Corps (IRGC) formed during the Iran-Iraq war, is responsible for planning and conducting foreign operations, intelligence gathering and terrorist activities. Brigadier General Esmail Qa’ani, deputy of the Quds Force Commander Major General Qasem Soleimani called the Quds Force at the time of its formation “the International Islamic Army.” The Quds Force plays an active role against coalition forces in Afghanistan, the same role  it had in Iraq. On May 27, 2012, General Qa’ani said that if the Quds Force “did not have a presence in Syria, Bashar al-Assad’s government would have already been overthrown.”

During Ahmadinejad’s presidency, Quds Force’s activities in Latin America and especially in Venezuela have significantly increased.

The Quds Force dispatches its elements to Latin American countries under various covers including charities, religious and cultural institutions, foreign embassies, and even construction and military projects.

The “Organization of Abroad Howzeh and Islamic Schools” is one of the cover organizations used by the Iranian regime for expanding the presence of Quds Force in Latin America.

Activities of the Iranian regime in the areas of exporting fundamentalism and terrorism are entirely linked to the Supreme Leader and are financed by the Office of the Supreme Leader. Khamenei’s Special Office under Mullah Asghar Hejazi  directs special operations of Quds Force and Ministry of Intelligence (MOIS).

The mullahs’ regime has created two parallel and complementary organizations to export Islamic terrorism and fundamentalism:

1. International Center for Islamic Studies. This center admits Islamic studies and regular students from all over the world in the city of Qom, trains them, and then returns these cadres to their original countries to advance the regime’s goals. The trained individuals will then become the center of the activities of Quds Force and MOIS in the countries designated by the regime.

2. Organization of Abroad Howzeh and Islamic Schools. The mullahs’ regime has created schools for training and teaching fundamentalism in more than 80 countries.

Activities in South America
The mullahs’ regime has established the Organization of Abroad Howzeh and Islamic Schools as well as representative offices and Islamic centers in the South American states. In some countries, the centers and representative offices are managed by native individuals who have been trained in Qom and had studied religious studies at the International Center for Islamic Studies.

Argentina:
In South America, Argentina is the focal point of all activities by the organization. The Organization of Abroad Howzeh and Islamic Schools has established schools, Islamic seminaries and mosques in most major cities of Argentina. All of these centers are managed by technical native cadres.

Brazil:
The Organization of Abroad Howzeh and Islamic Schools has a center in the city of Curitiba.

Venezuela:
The Organization of Abroad Howzeh and Islamic Schools has no direct presence in Venezula, instead, the Ahlulbayt World Assembly is active there, and the Quds Force has a highly active presence in the military organizations of Venezuela under the cover of construction and industrial projects.