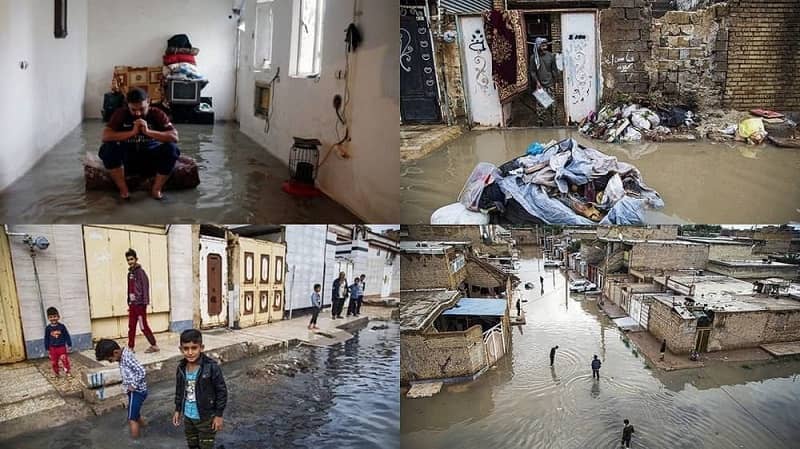 Heavy rainfalls in recent days in Khuzestan province, southwest Iran, have created flash floods. Locals have difficulties due to flooded streets. While people are grappling with flash floods, the regime’s officials are busy continuing their nuclear bombing program and producing missiles.

Lack of sewage disposal system and surface water conduction canals has caused water to rise on the street and sewage to enter people’s homes in Ahvaz, Karun, Bandar Imam, and Mahshahr in Khuzestan province.

Floods and flooding in the four cities of Ahvaz, Mahshahr, Omidieh, and Ramshir caused offices and banks on Sunday to close.

Situation of people in Jarahi township in Mahshahr, SW #Iran.
The Iranian regime killed dozens of people in November 2019 #IranProtests in the city. Many dissidents are still behind bars. A city with dozens of petrochemical companies but its people suffering from unemployment. pic.twitter.com/MhygqEsw3b

“In the suburbs, dilapidated houses are flooded, and many citizens are worried about their houses collapsing. In the past years, we have witnessed such rainfall in the province. But unfortunately, after the floods of 2018 and 2019 and the influx of alluvium and sediments, the rivers do not have the necessary capacity to drain water,” said Masoud Kanani, an environmentalist.

“No management has been done to protect the river route since 2018. Also, for 20 years, the [regime] has not taken any action to improve Ahvaz’s sewage system, and they are traditionally directed to the Karun River. Due to the increasing amount of sediments, rivers’ capacity decreases, and with the least rainfall, this water enters directly into sewers and pipes,” he added.

In 2019, a devastating flood spread rapidly in Khuzestan province. Starting mid-march until April 2019, flash flooding affected many Iran parts; hundreds were killed or went missing. These floods affected millions of Iranian citizens. The flood started after a couple of days of heavy rainfall.

These floods could have been prevented. The systematic deforestation and the looting of the natural resources in northern Iran by the regime’s officials and entities such as the Revolutionary Guards (IRGC) prepared the ground for these floods. In 2012 FAO announced that Iran’s forests are being destroyed faster than anywhere in the world. The regime increased the severity of the floods by converting flood routes and dry riverbeds for urban development without proper drainage infrastructure.

The regime declined to help victims. Instead, the regime sent military convoys to flooded cities to deter possible uprising by people. The regime’s president, Hassan Rouhani, was on vacation in Iran’s Qeshm Island.

On April 12, 2019, many flood-stricken people in the city of Ahvaz, Khuzestan province, took to the streets protesting the regime’s inaction. People’s protests once again showed they consider the regime as the real reason behind Iran’s crises.

In this regard, Mrs. Maryam Rajavi, the president-elect of the National Council of Resistance of Iran said: “Under the mullahs’ rule, every natural calamity and every preventable problem from the COVID-19 to floods to earthquakes, turn into a major disaster.”

Under the mullahs’ rule, every natural calamity and every preventable problem from the #Coronavirus (#COVID19) to floods to earthquakes, turn into a major disaster. #Iran pic.twitter.com/g1xbL5aAeb