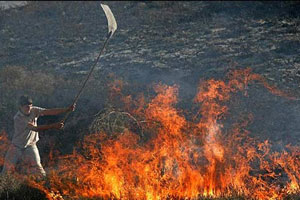 NCRI – Thousands of hectares of forests across Iran have been destroyed by summer fires – with many started deliberately by the Revolutionary Guard security forces, according to reports from inside the regime.

The latest devastation comes after official figures have revealed that the country’s forests have already dwindled from 18 million to 11 million hectares since the mullahs’ rule began in 1979.

And while the regime freely uses armed helicopters to crack down on anti-regime protests, none have been made available to halt the destruction of the country’s precious natural environment.

The fires across northern, western and southern Iran were ‘fully predictable’ during the onset of the parched summer season and many could have been prevented with proper planning and resources by the regime, insiders have said.

The state-run Etemad newspaper reported on July 20: “During past thirteen days, there were at least ten widespread fire incidents in different locations in north, west and south of the country and several thousand hectares of pastures and forests of Hirkani, Zagros, Arasbaran and Irani-Torni have been burnt in fires.

According to local residents, forest fires in Nowsoud and Nowdesheh in Kurdistan were lit deliberately by the IRGC on July 12 and 13.

The fires were started in the farms and forests of Kurdistan for ‘military and security’ reasons to enable the IRGC to have better control over border areas – hence the fire department have made no efforts to extinguish them, and even prevent local people from trying to put them out, reports said.
Meanwhile, figures from the United nations’ Food and Agriculture Organization (FAO) showed Iran’s forests now cover 11,075,000 hectares of the nation, or 7 per cent of the land area. This is down 33 per cent from the 18 million hectares of forests in existence when the mullahs seized power, the Etemad newspaper said last November.

This is because the regime refuses to allocate any budget or provide minimum equipment to deal with these disasters, and instead plunders the country’s assets on suppressing opposition and spending billions on its nuclear weapons program, regime insiders have declared.