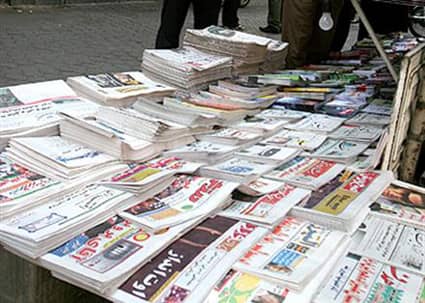 The rising death toll of the COVID-19 outbreak in Iran, and its economic consequences coupled with the mullahs’ devastating policies mismanagement, have turned the Iranian society into a powder keg. The state-run media are now warning of possible protests.

The state-run Sharq daily on Tuesday, quoting the mullahs’ former Health Minister Mostafa Moin, warned the regime of possible protests due to the coronavirus outbreak, its rising infections and the regime’s mismanagement. “The coronavirus outbreak, regional threats, and concerns about borders and national security have so far been a cover to [oppress] demands and protests,” Moin said. “The weight of the pressure of inflation and high prices, unemployment, and livelihood problems are on the shoulders of the patient people. The inefficiency and accountability of the new government and parliament in these circumstances will prepare the grounds for protests,” he added.

“What eliminates people’s patience and silence is not economic hardships, it is people’s mistrust in authorities,” wrote the state-run Aftab-e Yazd daily on Tuesday. “What has made the current situation more difficult and turned the society into fire under ashes is the nation’s unprecedented mistrust in the overall management of our society [by regime officials]? The main issues and dilemmas, if not solved, will sooner or later affect the entire ruling system,” the piece adds.

Describing the people’s uprising as “social threats,” the state-run Arman daily also weighed in on the dire issue. “In Iran, the poverty line is about ten million rials. It is estimated that about two million people are losing their jobs and one million social security workers have lost their jobs. 70% of workers are below the poverty line and their job security is declining,” a piece published on Monday reads. “These are all demographic traps of poverty, which will render black holes that carry social dangers and crises,” the article continues.

Etemad daily also acknowledged the mullahs’ oppressive measure to quell Iran’s restive society. “Creating an atmosphere of repression by using security processes, in the long run, creates frustration and dissatisfaction among the population and causes people to become demotivated. This issue causes leads to anomie or abnormality among our people and such a society will lead to severe violations,” the article reads.

The Iranian people are engulfed in poverty. Recently, 11-year old Seyed Mohammad Mousavi-Zadeh hanged himself for not being able to purchase a mobile phone to participate in online classes.

Instead of helping students like Mohammad, the regime’s Education Minister recently filed a complaint against a teacher for drawing his cartoon. This teacher has been sentenced to 45 lashes.

“Do you expect anything else from education officials?! Student suicide and a filed complaint against a teacher who draws cartoons. Apparently, Mr. Minister and his deputies are busy with other matters [more important than helping poor students],” the state-run Mardom Salari wrote on Tuesday. “During the coronavirus outbreak the Minister sued a teacher for drawing a critical cartoon and posting it on a Telegram group. This teacher is now sentenced to 45 lashes,” the report adds.

While referring to Mohammad’s suicide, the state-run Hamdeli wrote on Wednesday: “While suicide due to poverty in our country is not limited to adults and is now also seen among children, major state-linked institutions, in the name of supporting the needy, are actually obtaining billions from budgets and serving the rich instead of serving the poor.”

These entities, such as the Bonyad Mostazafin, or the foundation of the underprivileged, are under direct supervision of the regime’s supreme leader Ali Khamenei.