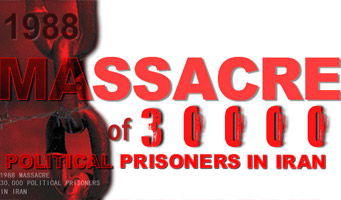 NCRI – Saturday marks the 27th anniversary of the massacre of 30,000 political prisoners in Iran. In the summer of 1988, one month after Ruhollah Khomeini was forced to accept a cease-fire in his eight-year war with Iraq, the fundamentalist ruler of the mullahs’ regime ordered a mass execution of all political prisoners affiliated with the main opposition group People’s Mojahedin Organization of Iran, PMOI (Mujahedin-e Khalq, MEK).

Click here to read a more comprehensive report about the 1988 massacre of political prisoners in Iran, including a copy of Khomeini’s hand-written fatwa.